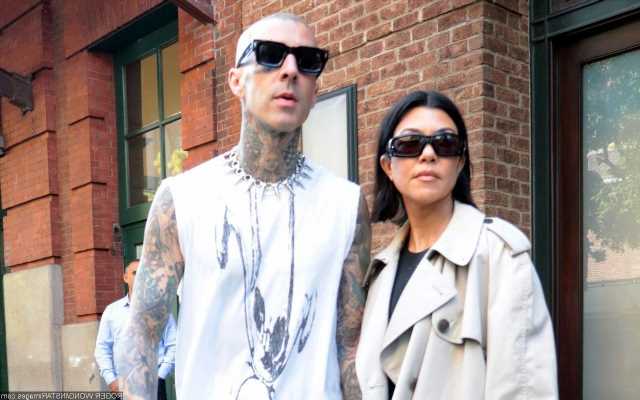 The newlyweds tied the knot in the coastal town of Portofino, Italy on May 22 after they legally married earlier in May following a practice wedding in Las Vegas in March.

AceShowbiz –Kourtney Kardashian and Travis Barker are adding new jewelry following their glitzy wedding in Italy. The former star of “Keeping Up with the Kardashians” and her new husband are wearing matching diamond rings.

“The Kardashians” star and her rocker lover tied the knot in the coastal town of Portofino on May 22 and they added some more bling to their collection with dazzling bands on their left hands. Managing Director of Angelic Diamonds Neil Dutta estimates the rings cost around £25,000 (roughly $31,400) in total with the reality star’s said to cost around £10,000 (approximately $12,500) and the Blink-182 drummer’s coming in at slightly more.

Neil told Britain’s HELLO! magazine, “Kourtney now wears two rings; her original engagement ring which is a 12-carat elongated oval diamond set on a platinum band worth £800,000 (around $1 million) and a new wedding ring which is a 3mm claw set platinum eternity band worth 1.40 carats, valued at £10,000.”

“Travis’ wedding band matches his new wife Kourtney’s, however his is slightly bigger with 2 carats set in a 4mm platinum eternity band, worth £14,000 (approximately $17,500).”

He added, “Fans may have expected a bigger price tag for the couple’s wedding bands, especially after seeing how much Kourtney’s custom-designed engagement ring is worth, however keeping the wedding bands simple allows the beautiful engagement ring to remain the center of attention.”

Kourtney’s extravagant engagement ring was made by famed jewelry designer Lorraine Schwartz and People.com reports she was behind the wedding bands too.

She previously told the publication that the engagement ring is a “flawless, beautifully cut diamond stone” adding Travis “was really hands-on in the whole making of it.”

The 43-year-old reality star legally wed the 46-year-old drummer earlier in May following a practice wedding in Las Vegas back March before holding a third ceremony for family and friends in Italy.