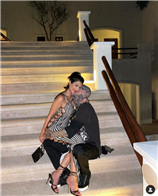 Kourtney Kardashian and Travis Barker’s relationship is surprising for a number of reasons.

Even though they grew up not far from one another, they come from very different worlds, and many of Kourtney’s fans were shocked when she transitioned from buttoned-down Scott Disick to tattooed rock star Travis.

But the most surprising thing about this pairing might be the way that Kourtney and Travis have behaved during their time together.

We’ve seen both of them in public long-term relationships before, but none of those romances featured quite this many public displays of affection.

Maybe Kourt and Trav were just never this happy before.

Whatever the case, while their pics rack up likes by the millions, it seems that not everyone is a fan of Kourtney and Travis’ PDA.

Travis’ ex-wife Shanna Moakler has been making tabloid headlines for several months now, thanks to her comments about her ex’s relationship.

Specifically, she’s been complaining about Kourtney and Travis’ PDA.

“Shanna’s moved on from Travis, but it’s been hurtful that everything he’s doing for Kourtney he did before for her, like the plane flying overhead, the flowers,” a source close to the situation told People magazine.

“Again she’s moved on from Travis and has her own boyfriend and life, but this is just hurtful to her.”

Unfortunately for Shanna, it doesn’t look as though Travis and Kourtney will be switching up the sort of content they post anytime soon.

In fact, the latest post on Kourtney’s page has led to rumors that she’s intentionally taunting Shanna.

As you can see, Kourtney is staring directly into the camera as though she’s issuing a challenge to someone just out of frame.

“True Romance,” the drummer wrote, alongside a flame and heart emoji.

That may sound harmless, but Shanna has specifically staed that the pair’s frequent references to the 1993 Christian Slater Patricia Arquette film of the same name is intensely irritating to her.

The film was so special to Travis and Shanna during their time together that the couple named their only daughter Alabama, which is the name of Arquette’s character.

And it makes sense that Kourtney would be holding a grudge against Shanna.

In addition to criticizing Kourt’s social media posts, Moakler claims that her marriage came to an end whan she caught Travis having an affair with Kim Kardashian.

Shanna’s distaste for the Kard clan is so intense that she recently “liked” an Insgtagram comment about hating the Kardashians and replied, “You’re not alone.”

“My family’s broken because of this family and now my kids and I are alienated from each other because of another sister in the family,” she recently told TMZ.

“Thanks for destroying my family… twice,” she added as a parting shot to the Kardashians.

Needless to say, Shanna and Kourtney will probably never be besties.

It would be a little crazy for Kourt to post a pic with the goal of annoying Shanna, but then again, everything about this situation is crazy!