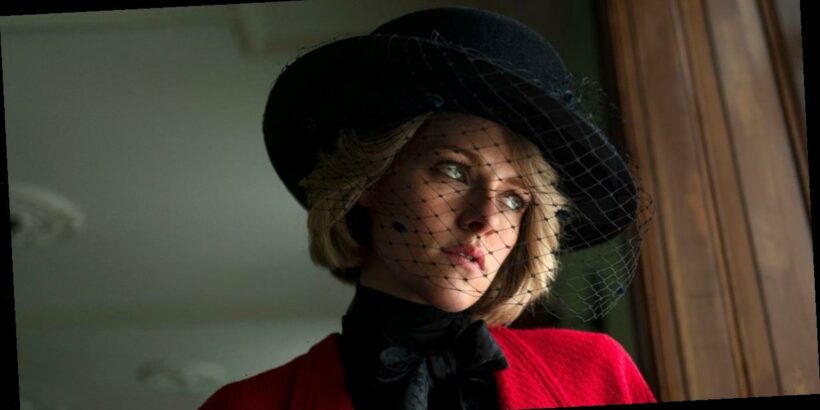 The first picture of Kristen Stewart as Princess Diana in the upcoming biopic Spencer has been revealed.

The film Spencer – in reference to her maiden name – will depict the Princess of Wales' troubled marriage to Prince Charles and focus on a critical weekend in her life when she decided she was going to file for divorce.

Twilight's Kristen, who shares a long history with her former co-star and ex-boyfriend Robert Pattinson, can be seen dressed in a black turtleneck top with a matching black-print bow tie around her neck as she perfects the downward gaze in the snap.

The 30 year old dons a red blazer and a black bowler hat with a matching veil as she sports the classic Princess Di short bob hairdo. The ensemble is similar to an outfit Diana wore in 1993 at Sandringham.

Fans were left in awe by the photo, with many taking to Twitter to praise the uncanny resemblance Kristen has to Princess Diana.

"Okay. Okay. I am presently very surprised in a good way." one person wrote with a smiling emoji.

Another said: "I didn’t even realize this was Kristen Stewart until someone pointed it out. I have no doubt she’ll crush this role!" [sic]

A third chimed: "She really looks like her! Love Kristen Stewart! Can wait to see it."

While a fourth added: "not gonna lie, the casting choice of kristen stewart as princess diana has been baffling me ever since it was announced, but this photo has completely changed my mind about it the resemblance is UNCANNY let’s just hope that everything else is uncanny too". [sic]

The reaction is a far cry to what people thought back when the news first broke in June 2020 as many were left unhappy by the choice.

Princess Diana house: Inside the sprawling stately home the People's Princess grew up in

One unimpressed person wrote: "Plenty of British actresses who would have been better for this role, Princess Diana was classy, Kristen is not. They don't even look alike."

Another tweet read: "Kristen Stewart playing Princess Diana is wrong on so many levels."

Chilean filmmaker Pablo Larraín defended his decision to cast Kristen after the uproar, telling Deadline: "Kristin is one of the greatest actors around today.

"Kristen can be many things, and she can be very mysterious and very fragile an ultimately very strong as well, which is what we need.

"The combination of those elements made me think of her. The way she responded to the script and how she is approaching the character, it's very beautiful to see. I think she's going to do something stunning and intriguing at the same time."