It's Kylie Minogue's 50th birthday and she'll party if she wants to.

The Spinning Around singer, who turns 50 on May 28, is getting out of her comfort zone and having a soiree in London because she reckons: "you only turn 50 once, right?" 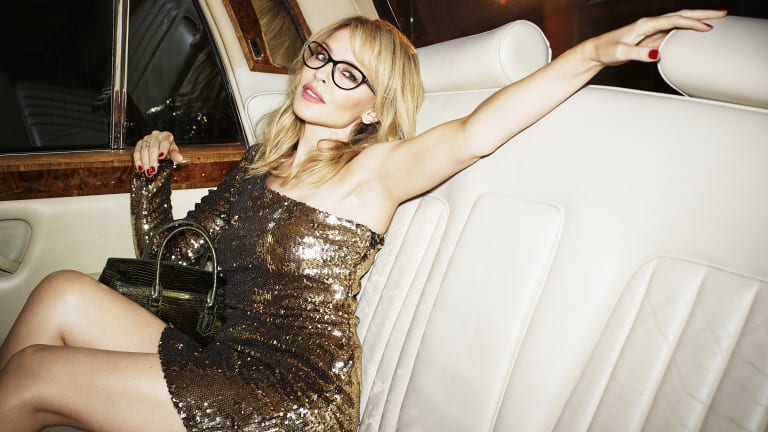 While she plans to cut loose, it won't be quite the OTT bash thrown by the likes of Elton John for his 50th, in which he wore a Louis XVI silver and pearl costume with two scantily clad men carrying the train of his fur coat.

"I'm having a bit of an extravaganza," she told Fairfax Media this week. "It's really unlike me. I sort of shy away from that kind of thing, aside from if it's for work and on stage then count me in. 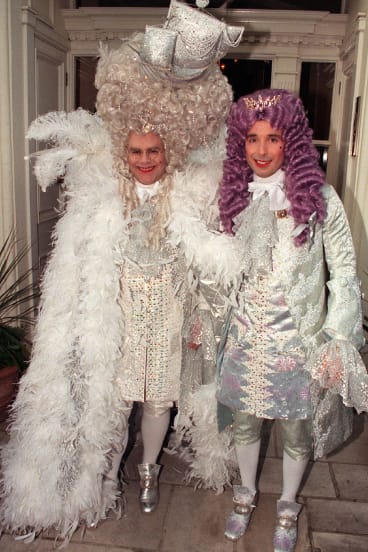 How Elton John celebrated his 50th birthday in 1997, dressed as Louis XVI alongside his partner David Furnish.

"For parties, I usually keep them very small, but on this occasion, I'm not, but I'm also not doing an Elton John, when he arrived as Louis XVI in the back of a truck," she laughed.

"I'll wear a simple dress. I have people who I know and love coming to party in London, so compared to some big 'dos it's going to seem quite modest but not by my standards, it's unusual for me."

She wouldn't say who was on the guest list in case she jinxed it, but confirmed there would be celebrities. Our guesses are: Domenico Dolce and Stefano Gabbana (Dolce and Gabbana), Baz Luhrmann, Graham Norton and maybe Jason Donovan – she couldn't not invite Jason, could she?

However, her family, made up of sister Dannii, brother Brendan and parents Carol and Ron, are unable to make it, so Minogue is going on separate trips with them all.

"My family can't make it, so we decided to all go away together as a family … But with their kids and work, it's not always easy, and we couldn't make it work, so I'll do something with each of the family this year," she said.

"I am very aware and thankful that this is a good time in my life."

"With my mum and dad, I am thinking of something up north of Australia or in the outback. They love doing stuff like that and I do too.

"With my sister, we are talking about going to Hawaii … and I'll plan something else with my brother … We can [celebrate] and make memories."

Last year was a tough one for Minogue after she split from her fiance, British actor Joshua Sasse, 30.

She told Vogue last month she felt like she was having "a slow, steady nervous breakdown". Following the split, she also pursued having children on her own but said, "that obviously wasn’t the path for me, either".

But one year on and another successful album, Golden (her 14th), under her belt, Minogue told Fairfax Media she was happier than ever.

"I honestly am. I am very aware and thankful that this is a good time in my life," she said.

"I know I have worked for it and I have paid for it and so I am enjoying it, between my schedules and trying to take care of myself as well.

"I haven't quite figured out how to exactly express it yet, but what it apparent is that people can see it and I know it's happening. I feel good and thankful."

Minogue was due in Sydney this week for the launch of her latest (and favourite) collection of glasses for Specsavers, but didn't make it. It's the second time this year Minogue failed to travel Down Under for work commitments, but her health comes first.

"I have just been flat-chat and, you know, I was meant to come to Australia [in March] but I had to cancel, I had bronchitis, and [now] I've been trying to manage my health and my schedule, so that's why I didn't make it this time," she said. 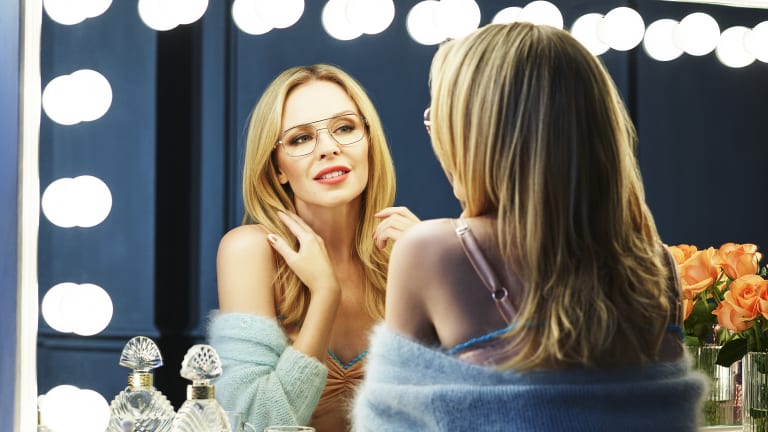 Minogue said her current range of glasses for Specsavers is her “favourite”.

She promised to be back "later in the year".

When it comes to sunglasses, Minogue will wear her pink-tinted shades this northern summer from her Specsavers range. She agreed with Mindy Kaling's musings this week that we would all come to regret the new trend of tiny spectacles (as worn by Kendall Jenner and Bella Hadid).

"I don't have any of them and didn't put any in this collection. I think it's taking the little nana glasses to the extreme," she laughed.