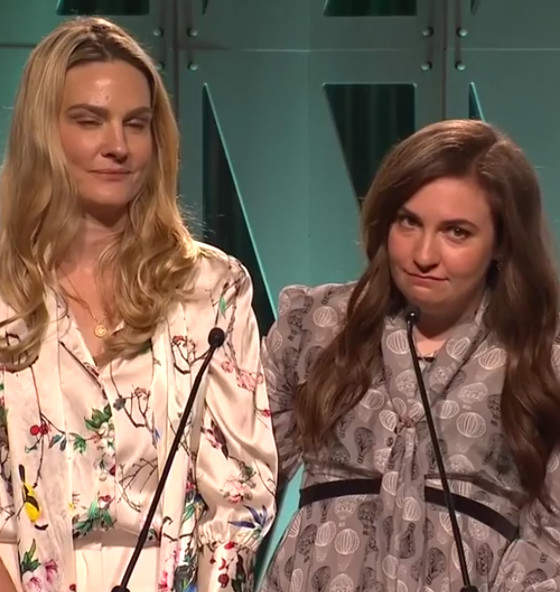 Lena Dunham has written a 1,300 word apology to Aurora Perrineau which was published by The Hollywood Reporter, and approximately 1,000 of those words are about what a brave survivor she is, and you already know the “she” I am referring to is Lena. If you’re into extreme self-care and somehow missed it (blessings unto you), Lena feels bad because last year she (and her ex-partner Jenni Konner, who I hope doesnt think we forgot about her ass) publicly defended her friend and Girls writer Murray Miller against rape allegations made by Aurora who filed a police report and claimed that Murray sexually assaulted her in his home in 2012 when she was 17-years-old. For this, Lena is sorry.

Lena is the guest editor of The Hollywood Reporter’s Women In Entertainment issue. As such, it seems she’s used her allotted “editor’s letter” as way to earn back some of her squandered feminist credentials (although I think she still eats eggs). However, to get to the crux of Lena’s apology, one has to wade through many, many words about Lena’s hidden trauma and disguised pain (she claims that a “Hollywood luminary” and an “Oscar nominee” each made inappropriate advances towards her, but doesn’t name names). Here’s what Lena had to say:

To Aurora: You have been on my mind and in my heart every day this year. I love you. I will always love you. I will always work to right that wrong. In that way, you have made me a better woman and a better feminist. You shouldn’t have been given that job in addition to your other burdens, but here we are, and here I am asking: How do we move forward? Not just you and I but all of us, living in the gray space between admission and vindication.

And so I made a terrible mistake. When someone I knew, someone I had loved as a brother, was accused, I did something inexcusable: I publicly spoke up in his defense. There are few acts I could ever regret more in this life. I didn’t have the “insider information” I claimed but rather blind faith in a story that kept slipping and changing and revealed itself to mean nothing at all. I wanted to feel my workplace and my world were safe, untouched by the outside world (a privilege in and of itself, the privilege of ignoring what hasn’t hurt you) and I claimed that safety at cost to someone else, someone very special.

Oh, so she lied to us! Not surprising, but truly low-down and rotten. Lena claims that she was acting on an internalization of the “dominant male agenda” but now she wants to:

Girl, we already know way too much about your cavern and I’m sure Aurora doesn’t want anything to do with it. To cap things off, Lena trotted her “dear friend” Brittany Perrineau (that’s Aurora’s mother), out on stage with her at the VIP Gala for the Women in Hollywood issue and it was AWKWARD! Turns out Britney is the one who tuned Lena up, and made her the woman she is today. As much side-eye as I’m giving Lena’s apology, I’ve got enough to spare for THR for giving Lena the job of guest editor for the WIH issue. Woldn’t it have just been easier to find a women for the job whose got nothing to apologize for in the first place?