There’s always that one Bachelorette contestant whose physical appeal we don’t really get, but who we’ll gladly let the lead keep around for general entertainment. This year’s wildcard pick seems to be Leo Dottavio, who first won over fans in the Season 14 preview when he released his luscious curls from his messy man bun. He may strike some of us as a modern-day Fabio, but Leo’s humor in Episode 1 solidified him as someone enjoyable to watch. His comfort with being on-camera isn’t a fluke either — Leo from The Bachelorette’s IMDb page shows the L.A.’s stuntman’s long history of working on various film and TV projects.

According to his Bachelorette cast bio, 31-year-old Leo has crafted himself a career of stunt work in TV, movies, and stage shows, but he also works for his family’s construction business on the side (how does he fit all that hair into a hardhat?). A deep dive into his IMDb page, where he’s listed as Leandro Dottavio, reveals an eclectic range of TV and film appearances, and his appearance on The Bachelorette isn’t even the most recognizable title on his résumé. In 2017 alone, Leo acted in small, often nameless roles in SMILF, American Horror Story, and FX dramedy You’re the Worst. Did ABC actually cast an "actor" who’s truly an actor? 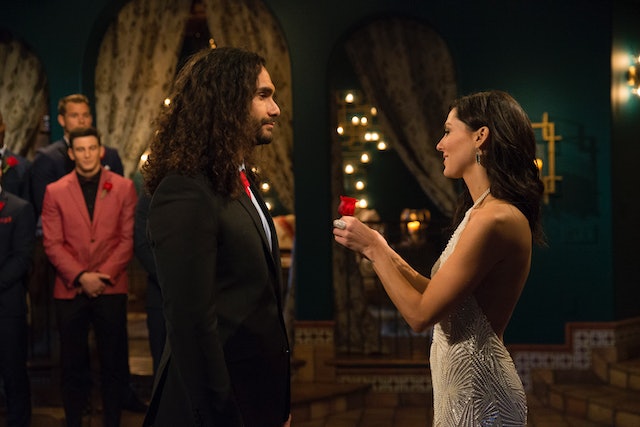 As for his stuntman credits, Leo has also contributed to fairly noteworthy projects. His IMDb page lists stunt work in SMILF, the Connie Britton-helmed 9-1-1, the Netflix series Love, American Horror Story, and even the Oscar-nominated film Moneyball. In other words, his credits are seriously impressive. Based on some of his most recent Instagram photos, I can only assume that a stint on Survivor is also in store for Leo if his relationship with Becca doesn’t work out. If not, there’s always hope for a new TV series about Tarzan, right?

When it comes to which of his gigs was his favorite, Leo singled out the Love job on Instagram, sharing a behind-the-scenes look at his stunt rehearsal. It seems that his scene was filmed at Universal Studios Hollywood’s WaterWorld, where Leo also performs in a stage show. Basically, he’s the closest thing to a Disney World character that the Bachelor franchise has ever had on one of its shows.

Still my favorite stunt job to date! Got to work on a show created by the legend Judd Apatow and the episode on “Love” was about a guy getting an audition for Waterworld, which would surely change his life! ? Season 3 episode 8 on Netflix if you wanna see it. A truly phenomenal show especially if you’re in the industry. Thank you @action_horizons_stunts for the edit!! #stunts #boatdriver #fights #universalstudios #juddapatow #hammer #netflix #love #loveseason3

Well, that’s…interesting. Will that warrant Leo having a confessional moment with Becca later this season?

Scrolling through Leo’s Instagram also reveals some tidbits about his life outside of acting. As a (short-haired) teenager, he played baseball, and he posts frequent photos of his parents. As with any Bachelorette contestant, he’s also posted his fair share of photos from the show so far.

Well here’s looking at you kid. Tune in Tonight at 8pm on ABC. Look, things might get interesting…. #thebachelorette #thebachelor #becca #thefinalrose @bacheloretteabc

I’ll admit it, his Casablanca reference in this caption made me swoon.

Having professional athletes and a stuntman among its cast, Season 14 of The Bachelorette has definitely snagged some guys who could easily not be there for "the right reasons." Nowadays, who can tell when it comes to a guy’s true intentions? However, given how upfront Leo was about his stunt career in Episode 1, I still have high hopes about how he’ll come across throughout the competition. Time to go on an American Horror Story binge to spot him!