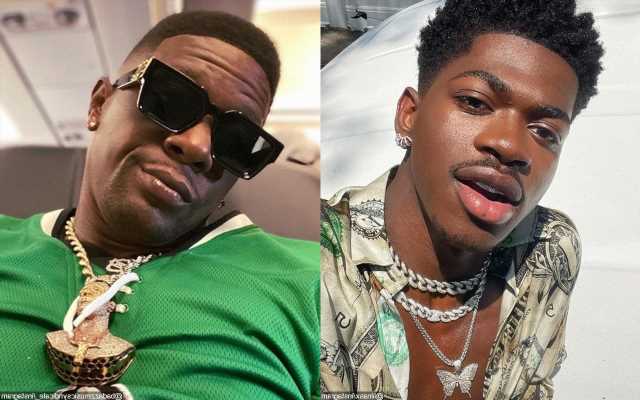 The ‘MONTERO (Call Me by Your Name)’ singer believes that Boosie, T.I. and others who have come out against his ‘Insdustry Baby’ music video are ‘mad that [he’s] gay and still succeeding.’

AceShowbiz –Lil Nas X is not afraid of Boosie Badazz (Lil Boosie)’s violent threat. Upon learning that his “peer” threatened to “beat his a**,” the “MONTERO (Call Me by Your Name)” singer was quick to shut down the Baton Rouge rapper on Twitter.

On Thursday, July 29, the “Old Town Road” hitmaker retweeted a link of his new music video, “Industry Baby”. Along with it, the MC penned, “I usually don’t respond to negativity from my peers. But this had to be said.”

Lil Nas X additionally threw a low-key dig at Boosie, T.I. and others who have spoken up against his latest music video. “I’m starting to think you n***as gay too cuz y’all stay on my d**k,” he wrote in one tweet, before adding in another post, “Some of y’all not even mad that I’m gay, some of y’all mad that I’m gay and still succeeding.” 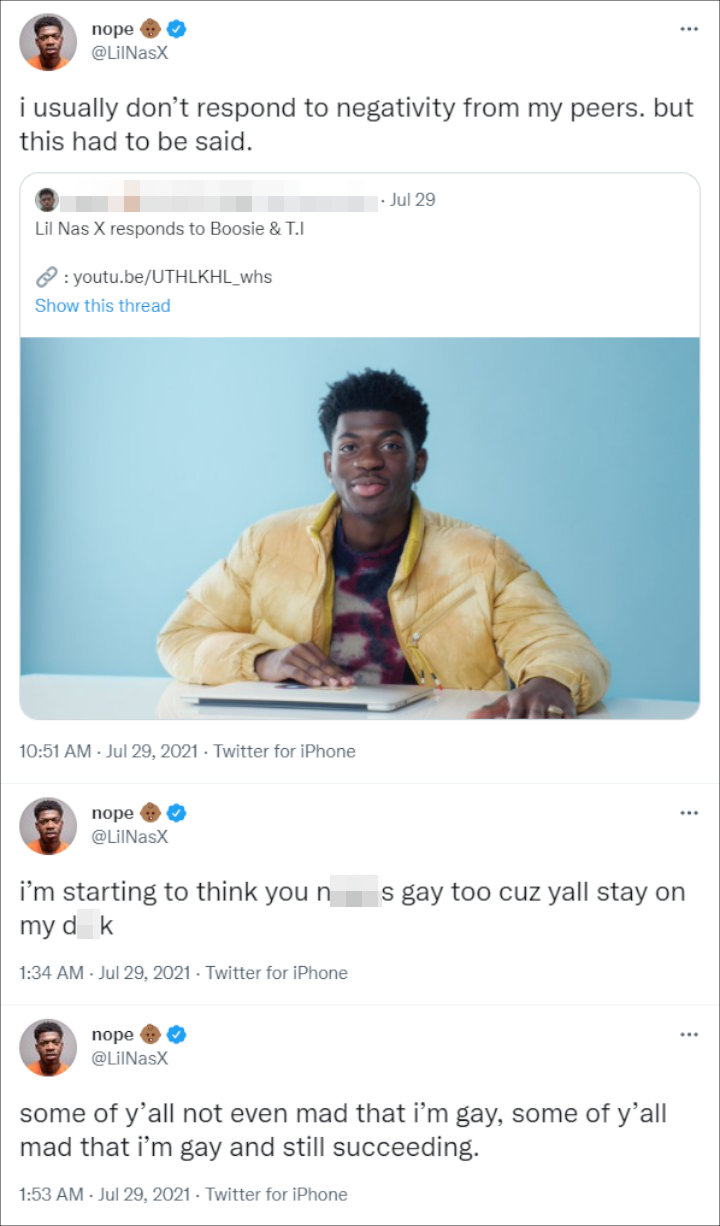 Lil Nas X also retweeted a screenshot of comments from former Lakers star Nick Young who described Boosie’s comments as “facts” and “freedom of speech.” In response, the 22-year-old Grammy winner tweeted, “a n***a saying he will ‘beat my f****t a**’ is not what we what we meant by freedom of speech.”

Boosie took aim at Lil Nas X while defending DaBaby over his homphobic remarks during his performance at Rolling Loud Festival in Miami. “Everybody not with their nephew sucking d**k. Everybody not with that s**t. You just can’t just put that s**t on everybody and expect it to be cool,” he raged. “[Lil Nas X] say he wanna perform naked onstage for charity. You don’t f**k with him like you f**k with DaBaby.”

“You know, be even-sided, man, be even-sided. You don’t feel that disrespect? Going [to] dance naked? You don’t think that’s disrespect in front of boys who tryna be straight? It’s totally disrespect,” Boosie further argued. “If I’m at an awards [show] and he go up there naked, I’ma drag his a** offstage and beat his a**,” Boosie continued. “You let a n***a dance naked in front your children, you a motherf**kin’ crazy motherf**ker–or you like d**k too.”