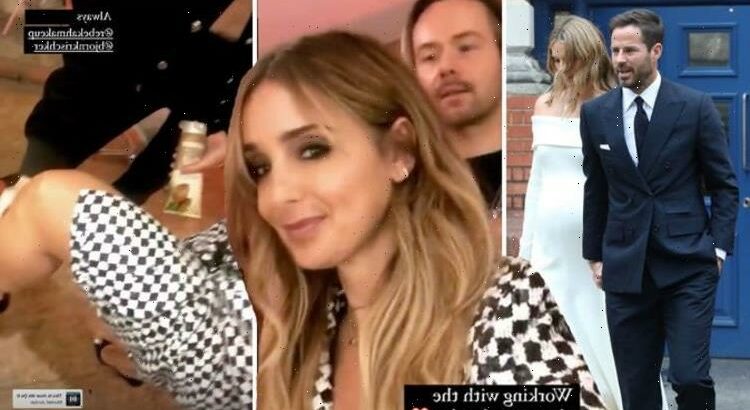 A week on from their big day, 46-year-old Louise seemed in high spirits as she prepared for a photoshoot today.

The singer shared a video of her with her glam team finishing the final touches of her make-up as she laughed and joked with them.

Louise went on to tease fans with a glimpse of her legs as one of her team members applied fake tan to her.

Showcasing her stunning display, she was all smiles for the camera and appeared in high spirits.

The mother-of-two opted for a white and black dogtooth-pattered suit and carefully contoured make-up.

Adding to her look, she styled her blonde hair in glamorous waves and styled it in a middle parting.

“Always fun gang,” she captioned her clip, which featured Montell Jordan’s hit This Is How We Do It.

Louise went on to share a Boomerang video of one of her sons playing golf.

“From glam squad to sports squad,” she added.

Louise and Jamie split back in 2017 after 19 years together and divorced the following year.

The football pundit first met Swedish model Frida, who is also a mother-of-four, back in 2019.

The couple are believed to have grew close after meeting through mutual friends.

Last year, it was revealed Frida was expecting their first baby together.

The pair are yet to speak of their baby news publicly, however Jamie’s dad Harry confirmed the news back in May.

“It’s good news, so looking forward to that and it’s exciting times.”

Last year, the retired footballer also said his new daughter-in-law is “lovely” but didn’t want to speak about her, out of respect for Louise.

He told The Sun: “We did meet Frida and she is lovely, very nice, but I don’t want to talk about Jamie’s new relationship.

“The last thing I want to do is upset Lou. It is upsetting that Jamie and Lou aren’t together.

“It was a complete shock.”