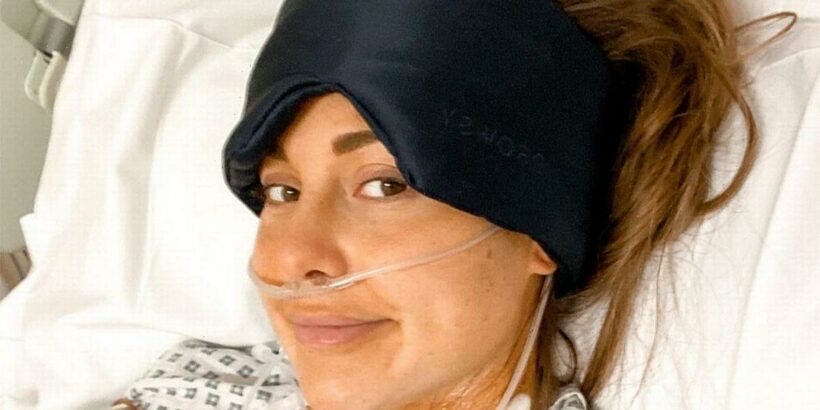 Louise Thompson has paid tribute to two nurses who helped her recover from childbirth complications amid the strikes over NHS pay.

The former Made In Chelsea star, 32, and her fiancé Ryan Libbey welcomed their son Leo in November last year, but Louise suffered severe complications during the birth and spent a month in hospital following her son’s birth.

Posting a lengthy message to Instagram, Louise spoke out about the nurses’ strikes, praising two of the NHS workers she met during her time in hospital.

Sharing a photo of herself in a hospital gown, she wrote: "A few people messaged me asking whether I was going to speak up about the nurse strike today.

"To be honest I have very mixed feelings towards our healthcare system as a whole. I have some very positive things to say and some very negative things (that I have and I will continue to keep to myself).

"I decided to take a look back at some of the pictures of my time spent in hospital in November/December last year and they make me feel sick. It was pure darkness.

"HOWEVER, there were two ladies who came to my rescue who I adored very much. They were my shining light, my beacon of hope and they made a MASSIVE difference to my experience.

"They were nurses that I met when I moved down into the high dependency unit. They looked after me well, they kept me in the loop, tried to give me as much information as possible and they even had to do some gritty things that they’d never done before, like unpick my infected staples that had grown into my skin (I was quite shocked that I was the Guinea pig and that these things were so casual).

"Also the fact that they were expected to just pull tubes and drains out of my neck and body like it was no big deal. What champs."

She continued to explain how the two nurses were by her side during an "a very intense flash back/trip out episode" after giving birth.

Louise concluded: "They rolled my body onto one side and changed my bedsheets from underneath my heavy naked body when I couldn’t move. They drugged me up. They helped me go to the loo.

"They put cream on my bedsores (I can’t believe these are actually a thing). They changed sweat ridden sheets multiple times a day. They fed me, shaved me, cleaned me. It was pretty grim. And yet they did it with such grace and dignity."

Louise continued her message in the comments of her post, adding: “Without good nursing staff hospitals will fall apart. Gov better do something about it.⁣” She wrote: “The stuff I witnessed, the amount of people coming in and out on a daily basis and the amount of strain they were under was shocking.

“All I can comment on from my personal and completely naive (unqualified to make an opinion and fairly biased) standpoint is that I think funding needs to trickle down to keep highly qualified and EXPERIENCED nurses in their jobs. Surely experience is everything?

“There needs to be some incentive. I was shocked at how young every one was around me which I guess says it all. The turnover rate must be high.”

Louise welcomed Leo with her fiancé Ryan Libbey, with the couple both finding fame on E4's Made In Chelsea and becoming engaged in 2018.

Despite her nerves about the bash, Louise later told fans the whole event went smoothly.

Sharing a picture from the party on Instagram, she concluded a lengthy caption with: "The good news is that I had a fantastic time, with great company, and not a single tantrum in sight."