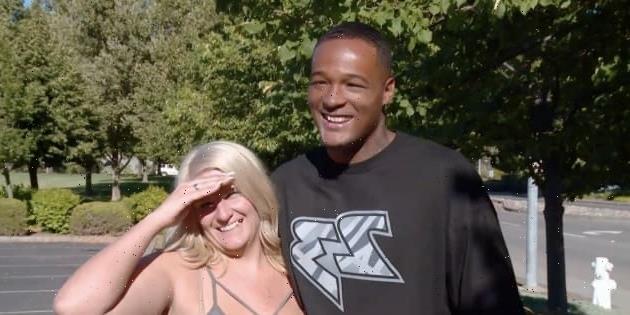 As we’ve discussed in the past, many of the stars of Love After Lockup are back behind bars these days.

This is not unusual among ex-cons, as the recidivism rate in America is depressingly high.

In this way, the show serves as a depressing reminder of the need for criminal justice reform in this country, as well as the ways in which newly released inmates are burdened by the government in ways that prevent them from successfully rebuilding their lives.

So even in the case of cast members you don’t particularly like — and there are lots of unlikable cast members in this franchise — it’s important to bear in mind that while other forms of comeuppance can be deeply satisfying, a return to the penal system is always at least a little bit tragic.

With that in mind (and the serious stuff out of the way), it’s time for an update on Maurice Gipson — a young man who did not win many fans during his time on LAL.

As you may recall, Maurice married Jessica Gipson while he was still in prison.

Jessica’s family was so wary of the relationship that her sister stopped talking to her completely — and it turns out those folks might have been onto something.

Maurice and Jessica split up back in August when he cheated on her with a woman named Mandy.

These days, Mandy is pregnant and according to a new report from Starcasm, Maurice is back behind bars.

And this is not the first time that he’s been arrested since his initial release last year.

(Perhaps Jessica should have taken it as a sign when he violated parole by leaving the state just hours after he became a free man.)

Maurice was first arrested for firearm possession and a parole violation back in February.

He was sentenced to 140 days in jail, and Jessica stood by her man during this difficult time, even going so far as to post a defiant message about how strong their relationship is:

But it seems that Jessica’s faith in Maurice was misplaced.

Despite the fact that the couple had recently welcomed a child together, Maurice cut Jessica loose not long after being released in April.

These days, he’s shacking up with Mandy — and based on a pic of a positive pregnancy test that recently appeared in her Instagram Stories, it looks as though Mandy is also knocked up.

Unfortunately, it seems that Maurice won’t be very present in the lives of either of his children — at least for the time being.

According to an arrest report from the Los Angeles County Sheriff’s Department, Maurice was taken into custody Wednesday evening on shoplifting charges.

Specifics are hard to come by, so it’s unclear if Maurice is facing hard time or not.

Whatever the case, his situation is probably looking pretty bleak, as the sheriff’s department also revealed that he was arrested in June on unspecified charges.

He was released shortly thereafter, but even so — it seems that Maurice is having a hard time keeping his distance from the long arm of the law.

And that doesn’t bode well for his ability to remain on the outside in the long term.