Love it or loathe it, Love Island is the hottest and most complained about show on TV where you’re never far from the next meltdown

With its steamy sex scenes, unique approach to language and what might be described as a tenuous grasp of the problems of the outside world, Love Island has become one of the most successful shows on TV.

But it is also the most complained about, with thousands of viewers contacting regulator Ofcom to say that, in the lingo of contestants, they’ve been ‘mugged off’.

And Friday’s especially risque episode looks certain to spark even more complaints. Viewers of the dating show, which features oiled-up hunks and scantily clad women lounging in a Majorcan villa, were treated to more bumping and grinding than a dodgem ride as contestants performed a raunchy lapdancing task. 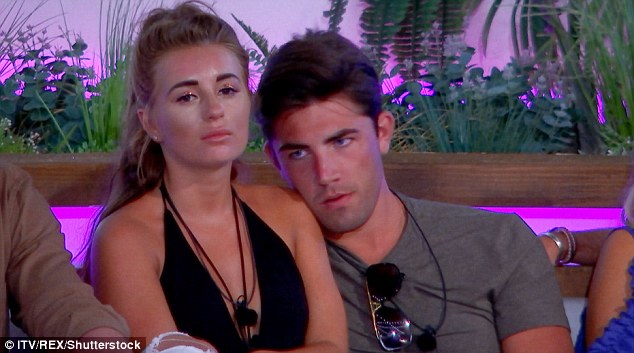 Love Island has become one of the most successful shows on TV but it is also the most complained about, with thousands of viewers contacting regulator Ofcom

Some of the programme’s 3.7 million viewers took to Twitter to complain about the ‘disgusting’ episode.

This series of the ITV2 show has so far sparked 2,727 official complaints to the watchdog – up more than 1,000 per cent on last year.

The vast majority came after bikini-clad Dani Dyer wept after seeing footage of boyfriend Jack Fincham being reunited with his ex Ellie Jones.

Another controversial moment came when Adam Collard unceremoniously dumped Rosie Williams, then smirked while she cried, leading one devotee to rebrand the show ‘Mug Island’.

But such high drama is surely also key to the appeal of a show that has enthralled everyone from politicians to plumbers, priests to pensioners – and has prompted more than 7.5 million tweets.

And there is much at stake for the contestants, who are encouraged to pair up in a bid to win the £50,000 prize.

Plus, there is considerably more to be made after they leave the island in lucrative endorsement and media deals.

Here are six explosive moments that have sent viewers into meltdown…

The one where Dani broke down in tears

They are the Harry and Meghan of Love Island, the couple who’ve won the nation’s hearts by refusing to ‘pie’ each other off. But Dani Dyer was left in tears after watching a video of boyfriend Jack Fincham’s ex, Ellie Jones, enter the villa. She sobbed: ‘It always happens to me. As soon as I’m happy with someone, something happens to me.’

What she wasn’t shown was loyal Jack refusing to share a bed with anyone other than Dani and confessing to missing and loving her. Cue public outrage at manipulative producers, with 2,632 complaints to Ofcom. 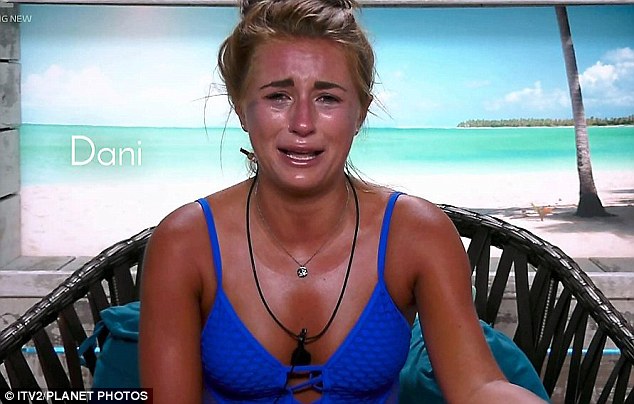 Dani Dyer was left in tears after watching a video of boyfriend Jack Fincham’s ex, Ellie Jones, enter the villa

Can you speak Love Island?

Mug, mugged off (v): To be dumped, taken for a fool, or a mug. Islanders use liberally and it has now entered the nation’s lexicon.

Graft, grafting (v): To woo or ramp up efforts to win the affections of your love interest.

The Do Bits Society (n): The group of islanders who have had sex or not quite but, erm, ‘done bits’.

Crack on (v): To make romantic overtures towards someone.

Melt (n): Someone who is soppy over another Islander, or a bit of a wimp.

Pied off (v): Being rejected or humiliated – as in smashing a pie into another’s face. 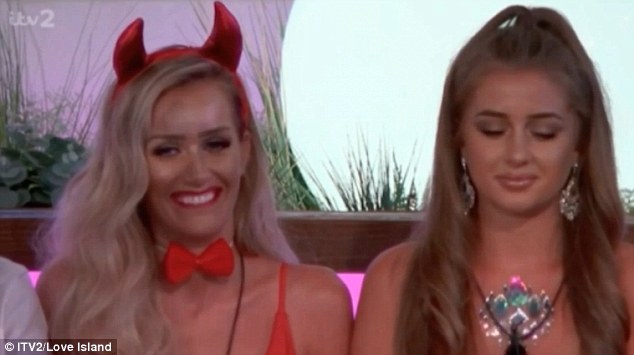 This series of the ITV2 show has so far sparked 2,727 official complaints to the watchdog – up more than 1,000 per cent on last year

The one where Dr Alex flatlined

He is is an A&E doctor but on Love Island, viewers have found Dr Alex George’s bedside manner lacks any vital signs.

Dubbed ‘Dr Dull’ with ‘zero chat’ on Twitter, the 26-year-old went from hero to zero after failing to get any of the Island ladies’ pulses racing. In last week’s toe-curling conversation with Grace Wardle, 25, the good doctor floundered when she couldn’t come up with any hobbies other than socialising and going to the gym.

One Twitter wag compared his flirting technique to a ‘French oral exam’.

The one where everybody danced over decency rules

Much flesh was flashed during the raunchy Dirty Dancing task on Friday night, with the islanders’ moves ranging from the X-rated to the X-cruciating.

Wearing a frilly Moulin Rouge-style outfit, Megan Barton Hanson moaned ‘it’s hard to be sexy on demand’ – despite being a former stripper. Drawing on the techniques she learned in her old job, she gamely thrust her ample assets into the boys’ eager faces, while Laura Anderson simmered as a saucy fishnet-clad devil, complete with trident.

But it was Dr Alex who truly set Twitter alight – with viewers begging him to stop. One said: ‘Even I can dance better than Alex… and I dance like a drunk walrus on slippy ice.’

Still, it could provoke protests to Ofcom. More than one user asked how they could lodge a complaint over the ‘disgusting’ task. 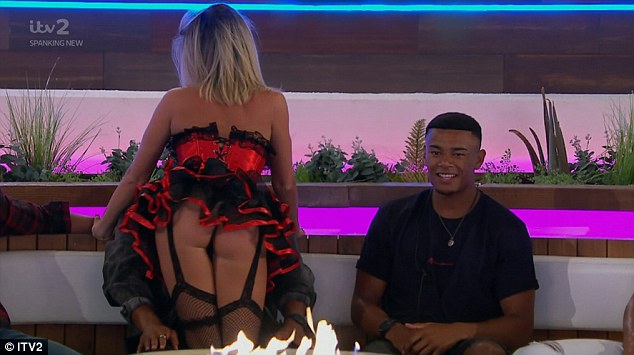 The one where Gee turned to ex

Georgia confided that she was falling for Josh, only to see him stroll into the villa with Kaz. Georgia pouted for the cameras before breaking down in tears. Bizarrely, the incident sparked a single complaint to Ofcom (Georgia’s mum perhaps?), but sent Twitter into overdrive.

The one – or rather many – where Megan was fickle

She is the glamour model from Essex who’s worked her way around Love Island’s men like a ravenous T-rex before ditching them.

‘Muggy Megan’ first stole nuclear engineer Wes away from Laura Anderson, 29, who dubbed her ‘a slag’, then chucked the hapless hunk for Alex Miller, before telling Wes that she still had feelings for him.

Last week, the 24-year-old was saved from the public vote by Wes.

She then failed to even glance back at poor Alex, who exited the show with a broken heart. But many viewers wondered why the boys fall for her when – in the words of one tweeter – ‘she’s got the personality of a dry sponge’. 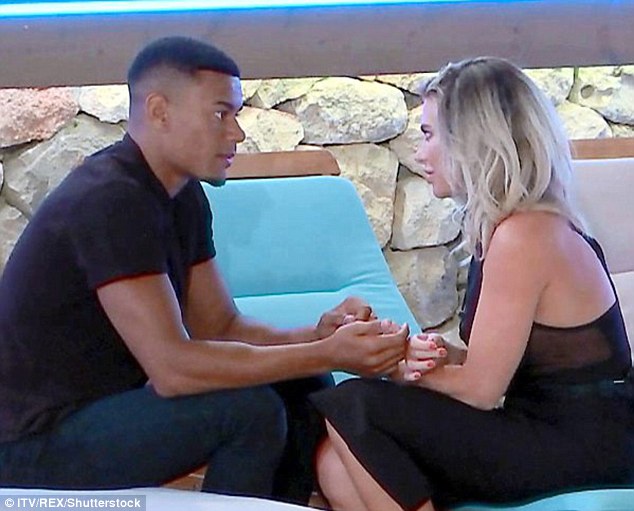 Zara McDermott, who was sent home from Love Island after ten days, has been told she may not be able to return to her job as a policy adviser to Education Secretary Damian Hinds.

Essex girl Zara, 21, was granted a year’s sabbatical from the civil service to pursue a music career – but failed to tell her bosses about Love Island.

She suffered more humiliation when an ex posted nude pictures of her online.

Her father Alan, a mandarin at the Department of Business, was told that she had broken the civil service code – but her spokesman insisted she has been in talks with her employers and should be able to return to work.

A source said: ‘If she’d been more discreet, it could have been OK.

‘But talking so openly on Love Island about being a civil servant has made things tricky.’

The one where Adam was accused of ‘gaslighting’

Viewer rage reached fever pitch when Geordie lothario Adam Collard, ‘mugged off’ a girl for the second time, ditching Welsh solicitor Rosie Williams for Essex girl Zara McDermott. The fitness expert smirked when Rosie complained: ‘I don’t think you have any idea how much you’ve hurt me.’

Ofcom received 31 complaints and many more took to Twitter, with one calling for Adam to ‘experience full castration’.

He then partnered heavily tattooed Darylle Sergeant in a sex positions game.

Radio 2 presenter Zoe Ball called him ‘a twit’, while the chief executive of Women’s Aid accused Adam of ‘gaslighting’ – manipulating women into questioning their own sanity.