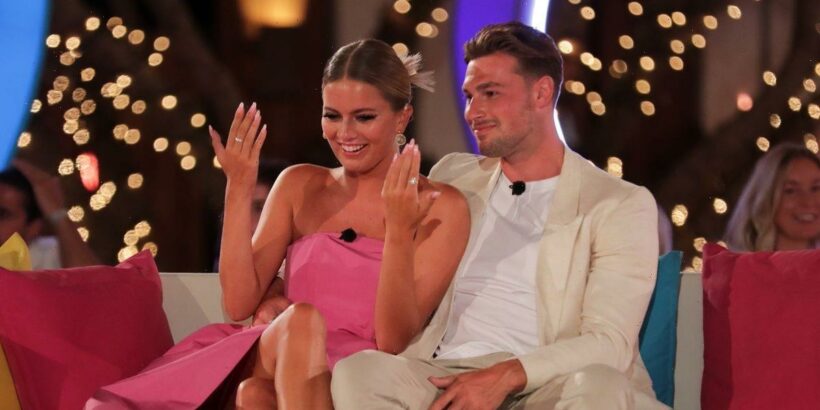 Love Island star Andrew Le Page has praised his partner Tasha Ghouri’ s dad for his tongue in cheek Casa Amor joke, as the pair sat down to give their Love Island exit interview after sadly missing out on this year’s coveted win.

Opening up about their journey so far, Andrew spoke highly of Tasha’s dad Tarek and how important it was to earn his blessing in order to continue his romance with the love of his life.

Reflecting open the moment Tarek dubbed him “Prince” during their first meeting, Andrew said: “I was not expecting that. That’s the first time I’ve met her dad.

“For him to say that was obviously insane. What every lad wants to hear from the girlfriend’s father. It was amazing, super special. I can’t wait to properly meet him and talk to him.”

It was also an important moment for Tasha too, who had been worried about what her dad might think of Andrew’s antics during Casa Amor, when he got close to new bombshell Coco Lodge, despite being head over heels for Tasha.

Tasha said: “Obviously I’m really close to my dad, and I know that he’s a great judge of character. If he didn’t like Andrew it would have broken us, because his opinion matters to me too much.”

Elaborating a little more on his protective nature, Tasha went on to explain that her dad’s disapproval had broken some of her relationships in the past, meaning to receive his blessing was a huge weight off the young dancer’s shoulders.

She continued: “In my past relationships my dad has told me he doesn’t like someone and it’s then ended badly. He just knows, he knows what I like and what I deserve.”

“He likes Andrew because he gives me what I’ve been looking for.”

During the Meet the Parents episode of the series, Tarek even made a joke about Andrew’s behaviour in Casa Amor, much to the couple’s surprise, which showed he had forgiven and moved on, just as his daughter had.

Describing how he felt in the surreal moment, Andrew said: “Going into the conversation I was dreading what I did at Casa, no father is going to want to see that.

Tasha agreed, as she reiterated that she had moved beyond mistakes and was instead focusing on the future instead.

She added: “For me, that chapter is closed. Ever since we became official it’s become a fresh chapter.

‘We are more ourselves around each other. If you keep thinking about the past, how do you move forward?”

Andrew even found himself laughing about it as his behaviour was revised during The Mad Movies, as he admitted: “ The Mad Movies we just laughed at it.”

So too did Tasha, as she explained so long as they were both happy, that was what mattered most to her.

She concluded: “We both were honest about everything and that’s why that night nothing stood out to me. We both laughed it off. We’re both happy which is what matters.”

Looking ahead to the future, the couple have already speculated on wedding plans, while a more realistic next step is moving in together.

“For me, I like to have a bit of banter,” admitted Tasha. “I’ve never been in love before, and the way I love Andrew is the first time I’ve felt it. I do get a bit ahead of myself.”

Despite having entertained the idea of becoming Mrs .Le Page somewhere further down the line, Tasha is keeping her feet firmly on the ground for the time being as she continued: “I need to remember to live in the moment and just think one step at a time.

“Definitely we’ll move in, for sure, as we’re both in London.”

Love Island: The Reunion airs on Sunday at 9pm on ITV2 and ITV Hub.