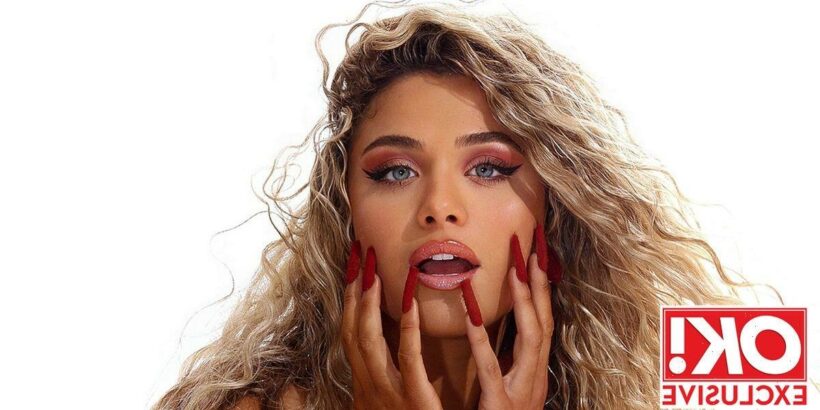 As Grecian goddess Antigoni Buxton made a surprise entrance in the Love Island villa, she wasted no time in ruffling the girls’ feathers by rapidly snapping up dates with Davide Sanclimenti, 27, Dami Hope, 26, and Jay Younger, 28.

And according to her younger sister, Sophia, that isn’t out of character for the “super competitive” stunner who “isn’t afraid to go after what she wants”. But she insists that “loyal” Antigoni “wouldn’t go behind anyone’s back”.

The Buxton family is no strangers to the spotlight, either. Sophia and Antigoni’s mum, Tonia, is a celebrity chef in her native Greece and a regular on Channel 4’s Sunday Brunch. Antigoni, 26, has herself been linked to Love Island favourite Jack Fowler, 26, and has also been pictured with 32-year-old boxing champ Anthony Joshua. So is sporty and muscular her type?

“She likes a tall boy with a good vibe,“ Sophia tells us. “She wants someone who works out without being too vain. Davide maybe?”

But while Davide may be Sophia’s pick, it was Jay who topped Antigoni’s wish list after their date. However, Jay also has his eye on Paige Thorne, 24, and is also coupled up with fiery Ekin-Su Cülcüloglu, 27, so who knows what drama awaits?

Here Sophia reveals all about her sister’s long-term relationship which ended before she entered the villa, why she
is a real “girl’s girl”, and her musical ambitions…

We love her name, Sofia. What does it mean?

Antigoni is an ancient Greek name which has been in our family for years. My grandma was called Antigoni and her grandma was called Antigoni. The Greek goddess Antigone was really loyal, just as my sister is. Antigoni was Oedipus’ daughter and she was so loyal to her father that she got buried alive trying to honour him. Her name fits my sister’s character perfectly. Antigoni will fight to the death for the people she is loyal to.

Why did she want to go on Love Island?

Since she’s been single, Antigoni’s been trying all sorts of new experiences, saying yes to loads of things. She loves making friends, and the show is a good excuse to spend the summer with young, fun people. Love Island is right up her street. Plus, she loves having a tan!

She’s been pictured with Anthony Joshua. Is he her dream guy?

She’s not blind! She can see he’s a good-looking boy. But there’s definitely no romance there. They’ve known each other for a little while now.

Why did her nine-year relationship come to an end?

Things ended amicably and they’re still good friends. She’s been single for 18 months. At first, she was just looking for fun, whereas now she is ready to find love. Hopefully, she will find a really nice boy. Well, a man…

She is 100% a girls’ girl, but she is super competitive, too. Board games in our house cause so many arguments. Antigoni definitely goes for what she wants – but she will do it respectfully.

She revealed after her first dates that the one she is most attracted to is Jay. Would she step on toes to get to him?

If a spark was there, she would go for it with Jay for sure. But she will be considerate and wouldn’t go behind anyone’s back. She is fiercely loyal to friends and partners. I don’t know anyone as loyal as Antigoni. If someone is her person, she will do anything for them.

Is Jay her usual type?

She likes a tall boy with a good vibe. As you can see, she goes to the gym.

Would you prefer her to bring Jay or Davide home as a boyfriend?

I don’t think we’ve seen enough of Jay so far, but we love Davide. Both of them seem lovely. Whoever she decides to bring home, we would love them.

Does Antigoni hope the show will be a springboard for her music career?

She is excited to be able to showcase her sound to a wider audience and also represent her roots and her culture. But that was not her main reason for going in to the villa.

Who would she compare herself to music-wise?

Her music is so eclectic, she doesn’t really have a direct comparison. She listens to such a wide range of people from Taylor Swift to Amy Winehouse, John Mayer, Drake, J Cole and Elvis. Her shuffle is bizarre. She’s drawing inspiration from all those people.

What will she be missing most in the villa?

Her guitar. She tried to get it in there but producers said, “No singing around the campfire.” She will also miss drinking tequila – and our one-year-old German Shepherd Tzatziki. We call him Ziki for short. It’s his birthday this week and she’s missing it.

Your mum is a big name in Greece. Are your family used to being recognised?

When we’re in Greece people recognise us, but over here we’re a really normal family – a big, loud family – but normal.

Will having famous parents give her something in common with Gemma Owen?

Gemma’s dad is known worldwide. She’s been famous her whole life, so it isn’t quite the same. But Antigoni will definitely get on with Gemma. She seems really mature and has good advice.

What will Antigoni’s secret skill be if she makes it as far as talent week?

It won’t be a secret – she will definitely be singing.

Will she feel tested if she gets to Casa Amor?

How did you feel seeing her make her entrance?

We cried. We couldn’t be prouder of her. We invited a big group of her nearest and dearest to the house to watch and we screamed so much when we saw her on screen! The dog was so spooked, he couldn’t handle the screaming!

Love Island continues every night at 9pm on ITV2.