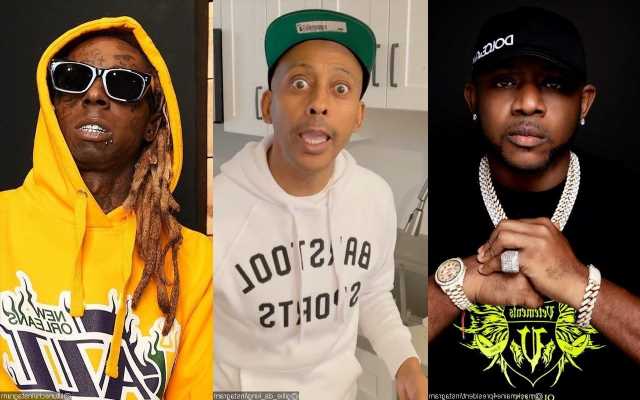 After the so-called King of Philly claims in an interview that Weezy appeared to be scared of him, the Young Money president shares a video of the interaction to refute Gillie’s claim.

AceShowbiz –Mack Maine has called out Gillie Da Kid over the latter’s statement about his feud with Lil Wayne. The New Orleans native has accused the Philadelphia-based rapper of lying about Weezy being scared of him.

In an interview with “It’s Tricky with Raquel Harper” last week, Gillie was asked if he and Young Money, which is owned by Lil Wayne, “ever fixed [their] situation.” The 36-year-old responded, “We never really had no situation, you know. I mean, he dissed me, I came back, I dissed him… I guess my diss was just taken way too serious.”

He was then asked if he’s talked to Mack or Lil Wayne. “Yeah, I just seen Wayne at Jackson State University,” he recalled their recent meeting. “Did y’all holler at each other,” Raquel asked him, to which Gillie replied, “Yeah, but no.”

He went on to do an impersonation of someone who looked shocked, suggesting Weezy was too scared to bury the hatchet and quickly fleeing the room. “[He] got the f**k outta there,” he said of Tunechi’s alleged reaction.

After catching wind of the interview, Mack shared the story from his point of view. Debunking Gillie’s claim that Wayne was afraid to see him, the Young Money president posted on his Instagram page a video of the two stars’ brief interaction. In the clip, Lil Wayne was seen smiling and shaking hands with Gillie before casually departing with no sign of tension between the two.

“Boy boy boy this Hollywood s**t crazy!! Please watch both videos,” he said in the caption, while also posting a clip of Gillie’s interview. He also criticized Raquel’s interview style, writing, “And say say @rocktopics ya know I luv ya but please keep us out them type convos you’ll probably never get the truth. I know the name of ya show is ‘It’s Tricky’ but don’t let em trick ya!”

“And if ya wrote the Carter 1 who wrote the Carter 2 and 3 and 4 and 5,” Mack added in the caption, alluding to Gillie’s claim that he ghostwrote Lil Wayne’s 2004 breakout album “Tha Carter”.

Gillie claimed in 2006 that he was behind Weezy’s hit album. “I penned a lot of that s**t, they had me around there,” he told HipHopDX at the time. “Stunna gave me 200,000 when I signed. They was so in a rush to get a n***a into a deal they didn’t do the publishing right there on the spot, they just wanted to get me ink. Soon as they got me ink then they wanted to discuss the publishing.”

He continued, “Once they didn’t want to give me the money I was asking for then I knew it was a problem. I had talks and sit-downs with Wayne he didn’t even know what publishing was and s**t, so I start seeing what was really going on around here.”