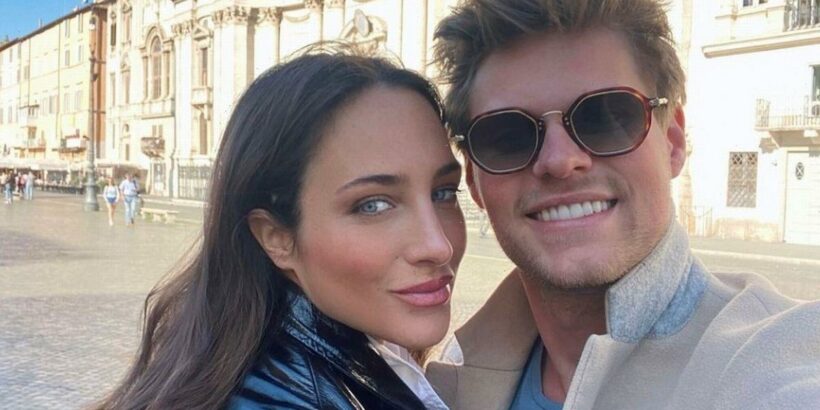 The 25 year old reality TV beauty, who announced her engagement to her co-star a week ago, is already having questions over whether she's secretly tied the knot.

But Maeva's decision to put things straight only came after her latest Instagram story, in which the blonde beauty posted an image of her growing baby bump.

In the snap, the star was dressed in casual lounge wear and relaxing on the sofa.

Pulling up her grey sweatshirt to show fans her belly, Maeva inadvertently revealed she was also wearing a second ring.

As her hand gently caressed her bump, the star showed off her glittering ring and what appeared to be a plain band, which was styled in a knot design.

"Is that a wedding band as well as an engagement ring. Are you already married," one fan messaged the star, adding heart eyes emojis to the excited note.

Reposting the DM, the star was quick to explain she wasn't surprised at the queries.

"Lol I knew I was gonna get messages like that," the reality star began.

"I have to wear another ring as my engagement ring is slightly big, and can't resize it just yet as I'll have swollen fingers because of pregnancy.

"So I wear another ring as I don't want to lose it!" Maeva added.

It's been an incredibly exciting year for the couple, who announced they were expecting their first child together earlier this month.

Revealing the news with a series of adorable snaps that showed James kneeling down and caressing his partner's bump, fans were overjoyed for the pair.

And only a few days later, Maeva shared the couple had gotten engaged during a sun-soaked trip to Portofino in Italy.

As well as some gorgeous images of the scenery, as the pair stayed in a quaint hotel overlooking the lake, the Made in Chelsea star also posted a close-up image of her showing her ring.

Beaming to the camera, the beauty could barely contain her excitement as she basked in the happy life news.

"Most beautiful day of my life," the star gushed, as fans flocked to the comments to congratulate the pair.

As the pair get ready for their new arrival later this year, Maeva also gushed over her husband-to-be, as she shared her excitement for their "new adventures" too.

"I’m so grateful to my amazing future daddy for giving this baby so much love already," the star told her followers.

For all your updates on TV and Showbiz, sign up to our OK! newsletter.