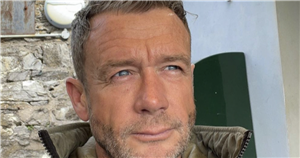 Married At First Sight’s Franky Spencer continues to open up to his followers about the difficulties he's experienced since appearing on the show.

Uploading a photo of himself to Instagram Stories on Sunday, Franky captioned:

“It was one of my biggest challenges ever.

“I would like to say a massive thank you to Maz for sharing this experience with me.”

In the final episode of MAFS, Franky and partner Marilyse Corrigan renewed their vows – despite doubts about their relationship from the show's experts and cast members – promising to commit to each other outside of the show.

While the experiment may be over though, the backlash on social media hasn’t stopped for the former military man who has claimed that the show edited him to be “negative’” and not “the real me”.

Franky posted a series of photos on his Instagram page also Sunday, appearing solemn during a recent trip to Plymouth.

“Being back in the UK has been a great opportunity to spend quality time with friends and family. My trip to Plymouth was very much needed after a battering on social media,” he captioned.

“I lived here from 91/99 where I served with the illustrious @29commando at the The Royal Citadel. “Was great to catch up with the legend Major Mark Scoullar. Also, ex serving Gareth Tichopad and his kids & Mick O’Brien.

Franky was called out as controlling throughout his time on MAFS, with even partner Marilyse seeing red flags in his behaviour in moments.

However, Marilyse has since come forward speaking exclusively to OK! Online in defence of Franky, siding with his claims that the show edited him unfavourably.

"He was lovely, he was very protective throughout the whole experiment. We had some great laughs together – I found him really easy to get along with. "But when it came out into the public and they were saying, 'Oh my gosh, he's controlling,' I got a lot of messages from women who have obviously experienced an ex-partner that's been like this," Marilyse continued.

" I didn't see it at the time and I still don't think he was controlling.

"But obviously that how he's been made to look and it's sad really because he's a nice person. Franky uploaded an excerpt of this interview to Instagram Stories, championing Marliyse for her support.

The unwelcoming reactions received on social media has no doubt been part of the reason the 47-year-old has found the show challenging outside of the experiment itself.

Whether or not Franky is truly happy with his outcome from MAFS will be confirmed on the reunion show which airs tonight at 9pm on E4.