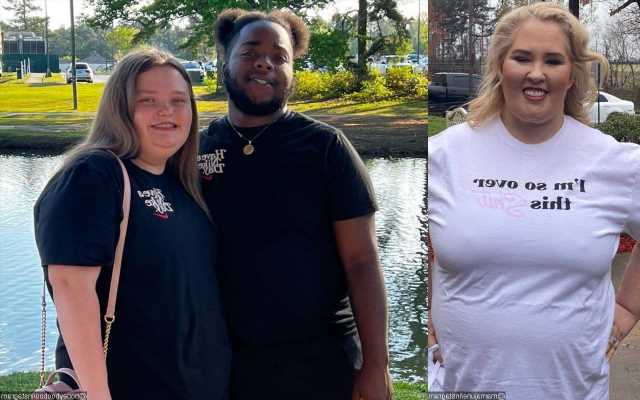 When speaking about Alana’s romantic relationship, the former ‘Here Comes Honey Boo Boo’ star reveals that she does not really mind about her daughter’s age gap with Dralin Carswell.

AceShowbiz -Mama June, also known as June Shannon is giving a green light on her daughter Alana “Honey Boo Boo” Thompson’s relationship, but she just has one little issue with it. In a new interview, the “Mama June: Family Crisis” star spilled on the one improvement she hopes to see from her daughter’s boyfriend, Dralin Carswell.

When asked about Alana’s romantic relationship, June revealed that she has actually approved of Dralin, but is hoping for one change from him. “They’ve been together over a year. He’s good. He needs to hold down a job a little bit more,” she dished to Entertainment Tonight’s Deidre Behar, “I mean, he’s not bad. He doesn’t treat her bad or anything like that.”

On the subject of Alana’s age difference with Dralin that sparked concern among fans, June did not seem to be bothered by it. “They’re [young] and they’ve been together over a year. So, if they last? Fine. If they don’t, it can be her first love,” she stated. The young couple has a four-year age gap. Alana is 16, while Dralin is 20.

Elsewhere in the interview, the TV personality also reflected on her connection with her teenage daughter, which was documented in new season of her reality show “Mama June: Road to Redemption“. She admitted, “Our relationship is going good. You’ll see that throughout the season.”

“She is turning 17 in August. So, that’s the thing. She is graduating next year,” June went on explaining. “A lot of people still look at her as that 6-year-old little girl, but she’s [grown up].”

It was also revealed that Alana is not currently living with June, but with her older sister Lauryn “Pumpkin” Shannon. Nonetheless, the 42-year-old reality star wished to mend their relationship and get her life back as she is in recovery for substance abuse.

“Alana knows that the door is always open. She knows that I’ve always been here,” June divulged. “Again, she’s a teenager and teenagers are going to be teenagers. That’s the best way I can say that.”