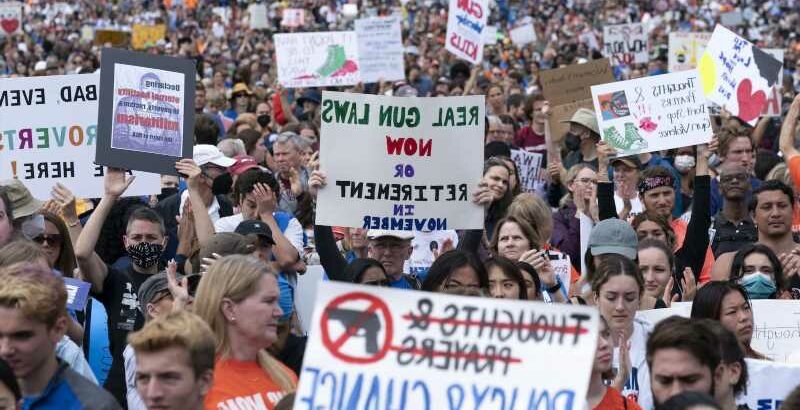 Four years after the first March for Our Lives rally in support of gun control, thousands of people attended rallies nationwide Saturday in the aftermath of mass shootings in Uvalde, Texas and Buffalo, New York.

March for Our Lives was founded by survivors of the Marjory Stoneman Douglas High School mass shooting in 2018; seventeen students and staff were killed in that Parkland, Florida shooting. Four years later, organizers announced a second March for Our Lives after 19 children were killed at Robb Elementary School on May 31, renewing demands for common sense gun laws once again.

“If our government can’t do anything to stop 19 kids from being killed and slaughtered in their own school, and decapitated, it’s time to change who is in government,” David Hogg, a Parkland survivor and March for Our Lives co-founder, told protestors Saturday near the Washington Monument, site of the main rally; the Washington, D.C. rally was also livestreamed Saturday.

Yolanda King, granddaughter of Martin Luther King Jr., told marchers, “This time is different because this isn’t about politics. It’s about morality. Not right and left, but right and wrong, and that doesn’t just mean thoughts and prayers. That means courage and action.”

Hundreds more satellite rallies were planned nationwide, including in New York, where Mayor Eric Adams and Attorney General Letitia James, who is suing the National Rifle Association, led a march across the Brooklyn Bridge.

“Nothing happens in this country until young people stand up — not politicians,” James said (via the Associated Press).

Rallies were also held in Parkland, Florida and in Buffalo, where 10 people were shot and killed in a racism-fueled attack on a supermarket on May 14, just two weeks before the Uvalde tragedy. With protestors gathered in a field across the street from the Tops supermarket, a moment of silence was held for the 10 victims, the Buffalo News reported.