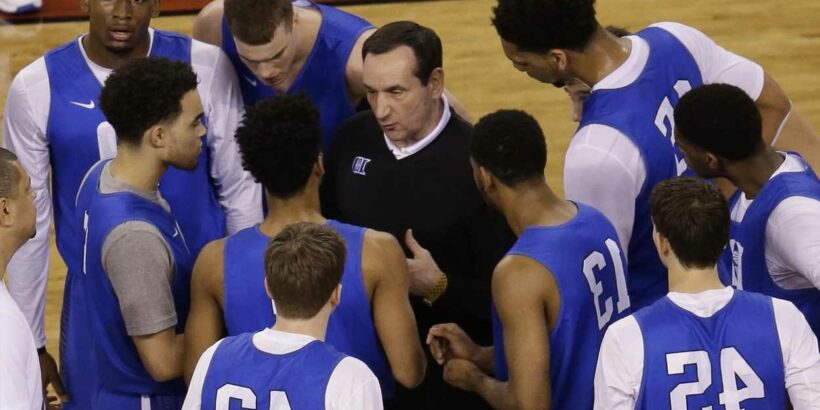 We’ve arrived at the Final Four in this year’s March Madness men’s tournament, and it’s shaping up to be a big one: Kansas and Villanova are both looking strong, but all eyes will be on Duke vs. North Carolina.

Two of the winningest college teams in history, the Tar Heels and the Blue Devils have a rivalry dating back nearly 100 years (ESPN ranked the teams’ enmity as the third-greatest North American sports rivalry of all time). Of their 256 meetings, UNC edges out Duke with 142 wins to Duke’s 115. However, Duke is the favorite in this weekend’s game.

And yet Duke and UNC have never met in the Final Four, making this weekend’s Duke vs. UNC match-up one of the biggest — and most-anticipated — games ever.

To make things even more interesting, Duke’s legendary leader, Mike “Coach K” Krzyzewski, will be retiring after this season. Should UNC win, it will be Coach K’s last game.

Krzyzewski will retire after becoming the winningest college basketball coach of all-time three years ago, now boasting a 1,202 to 367 record, including 101 NCAA Tournament wins and five championship titles over his 47-season career. Almost all of those wins were with Duke, where Coach K spent the last 42 seasons.

However, Coach K has always struggled with Tar Heels more than other opponents. His record against UNC is a mere 50 to 47, deepening the already-intense rivalry.

The Tar Heels and the Blue Devils will face off on Saturday, April 2 with tip-off set for 8:49pm ET / 5:49pm PT. The college basketball game will be held at Caesars Superdome in New Orleans, Louisiana, which is open to in-person attendance for fans wanting to watch Duke vs. UNC live.

For TV viewers, the buzzy match-up will be airing live on TBS. Don’t have cable? We found an easy way to live stream Duke vs. UNC online.

How to Watch Duke vs. UNC Basketball Game Online

Looking to stream the Duke vs. UNC game online? Head to Sling.com. The service is the best live TV streaming platform for sports fans, delivering live access to TBS, which will broadcast both Final Four games, as well as the NCAA Championship game next weekend. You’ll be able to stream the game on almost any smart device, including Roku, Amazon Firestick, smart TVs, and even portable devices like smartphones and tablets.

Sling normally costs $35 per month for its Orange tier, but right now the service is running a special offer: new subscribers can take $10 off their first month, bringing the price down to just $25. This special deal not only makes Sling one of the cheapest ways to watch the Duke vs. UNC game online, but one of the best live TV streaming deals in general.

How to Watch Duke vs. UNC Basketball Game Online Free

Sling no longer offers a free trial, so there isn’t a (legal) way to watch Duke vs. UNC online free. Still, the new Sling offer includes 50 hours of free DVR storage, so you can record the Final Four game and re-watch it as many times as you want for free.

Sling’s $25 deal is a limited-time offer and makes it cheaper than other streaming sites like fuboTV and Hulu, where monthly subscriptions run upwards of $70 a month.

Other Channels on Sling TV

Once the NCAA tournament is finished, use your Sling account to watch live sports on ESPN, ESPN 2, and TNT as well as TBS. Your orange subscription will include 32 channels total, with other popular broadcasters like CNN, USA, and Fox, ensuring plenty of live TV without cable.

Plus, even without the current $10 off deal, Sling is one of the cheapest live TV streaming apps out there. The app is easy to use, and available on almost any smart device, so you’ll be able to access live TV more easily than with a traditional cable plan.

Sign up for Sling here and get instant access to live stream Duke vs. UNC online this weekend.