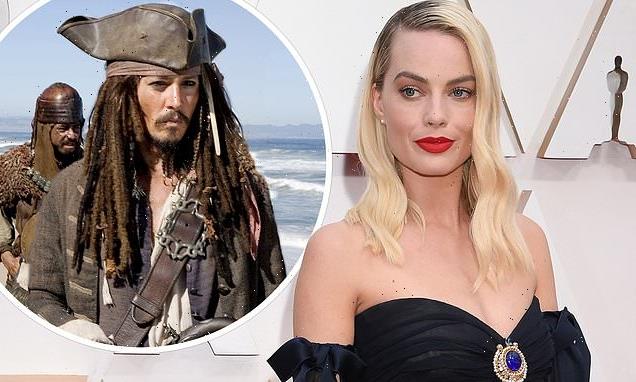 Margot Robbie is still in contention to star in female-led Pirates Of The Caribbean spinoff film, Hollywood superproducer Jerry Bruckheimer revealed in an interview with The Sunday Times.

The 78-year-old action film extraordinaire confirmed that Robbie, 31, was still in talks to launch her own film in the series, while another script is in the works to reboot the main series.

But unless there’s a drastic change in original star Johnny Depp’s current reputation, he’s unlikely to be asked back to the series. 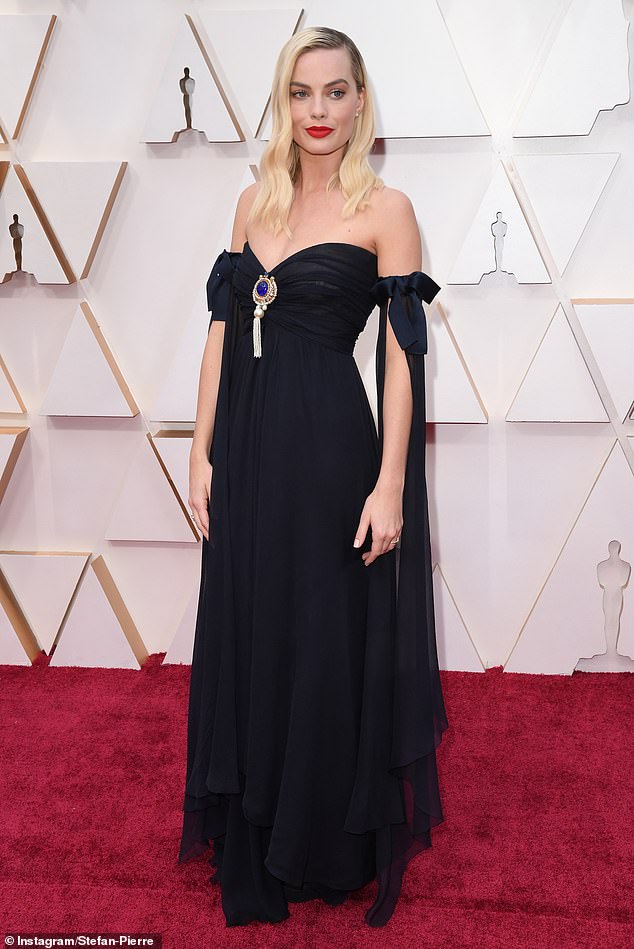 In the works: Margot Robbie, 31, is still in talks to star in a Pirates Of The Caribbean spinoff film, producer Jerry Bruckheimer told The Sunday Times; seen in 2020 in Hollywood

Bruckheimer spend plenty of time talking about his latest endeavor, the big-budget sequel Top Gun: Maverick, which has so far earned rapturous reviews.

It currently holds an impressive 97 percent fresh rating from critics surveyed by Rotten Tomatoes, and many of the positive reviews describe it as being better than the 1986 original, which also starred Tom Cruise.

But while musing on some of the biggest male stars of the past few decades — including Cruise, Leonardo DiCaprio, Brad Pitt and Chris Hemsworth — Bruckheimer said there were fewer female stars that carried the same weight at the box office.

‘Women are harder. It’s just not that strong a list yet,’ he said.

But the producer confirmed he was still working to get a new Pirates project off the ground with Margot.

‘Yes. We’re talking to Margot Robbie,’ he continued. ‘We are developing two Pirates scripts — one with her, one without.’ 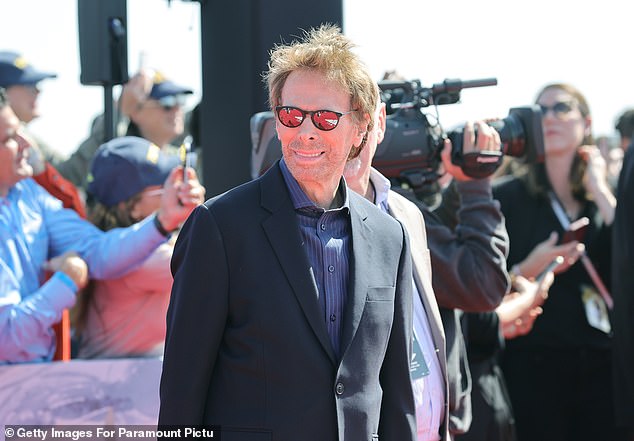 Still at it: ‘Yes. We’re talking to Margot Robbie,’ said the Top Gun producer. ‘We are developing two Pirates scripts — one with her, one without’; Bruckheimer pictured on May 4 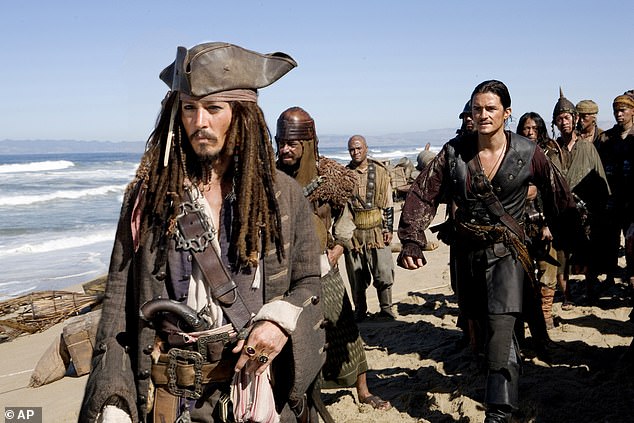 He’s out: Asked if Johnny Depp would be back, Bruckheimer told The Times, ‘Not at this point,’ though he added, ‘The future is yet to be decided’; seen with Orlando Bloom

The Hollywood Reporter shared in June 2020 that Robbie was set to star in a spinoff film in the series written by Christina Hodson, who wrote her Harley Quinn film Birds Of Prey, which was a hit with critics but underperformed at the box office.

Considering the transitory nature of Hollywood projects, Bruckheimer’s confirmation that Robbie is still in talks suggests he’s serious about getting the new film made, though it’s unclear if Hodson is still attached after their superhero collaboration failed to light up the box office.

The billionaire producer also referenced a second Pirates Of The Caribbean film without Robbie.

Prior to the announcement of the spinoff film, Chernobyl creator Craig Mazin and Pirates writer Ted Elliott were reported to be working on a reboot of the main franchise.

The Hollywood Reporter wrote in October 2019 that it was unclear if Depp would be back to star in the film, but Bruckheimer poured cold water on the idea of him returning anytime soon.

Asked if Depp would be back, he told The Times, ‘Not at this point,’ though he added, ‘The future is yet to be decided.’ 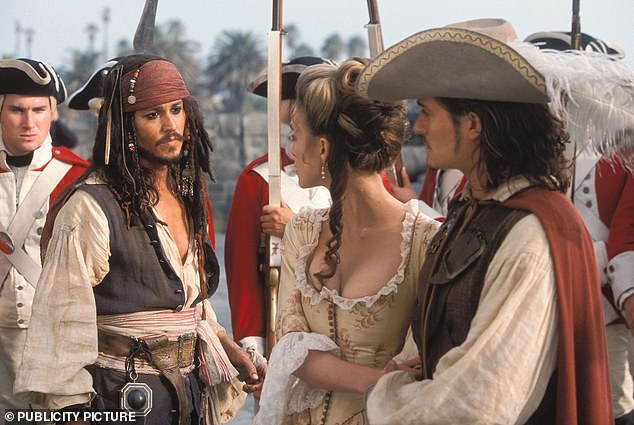 Toxic: The Edward Scissorhands star is currently involved in a vicious court battle after he sued his ex-wife Amber Heard for defamation; seen with Kiera Knightly and Orlando Bloom

The Edward Scissorhands star is currently involved in a vicious court battle after he sued his ex-wife Amber Heard for defamation.

During his trial, Depp agreed that even if Disney offered him all the money ‘on this earth,’ he would not reprise the role.

Heard’s lawyer Ben Rottenborn said in court: ‘The fact is, Mr. Depp, if Disney came to you with $300 million and a million alpacas, nothing on this earth would get you to go back and work with Disney on a Pirates Of The Caribbean film? Correct?’

And Depp agreed: ‘That is true, Mr. Rottenborn.’

The 58-year-old actor explained how ‘there was a deep and distinct sense of feeling betrayed by the people that I’ve worked hard for. People that I delivered a character to that they initially despised, but I stuck to my guns with the character and it seemed to work.’

The Aquaman actress is being sued for $50 million for defamation by her ex-husband over a 2018 op-ed she wrote about being a victim of domestic abuse.

Amber, 36, did not name Johnny in the article and has countersued in return for $100 million.

The trial is set to reconvene on Monday after a weeks-long break. 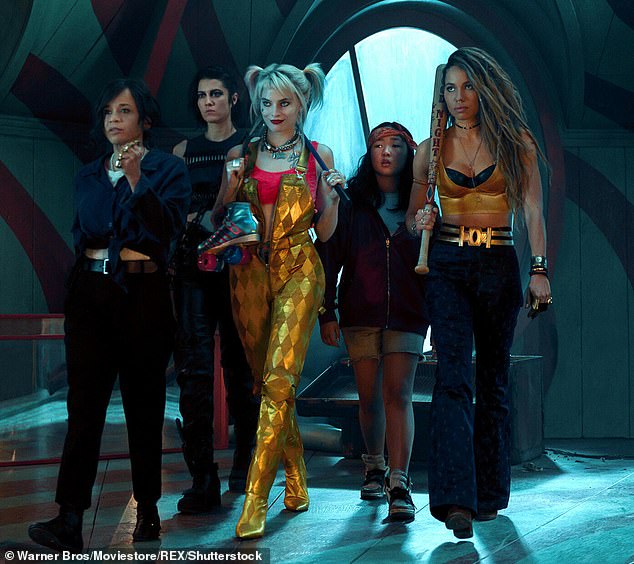 Change of direction: After her flops Birds Of Prey (pictured) and The Suicide Squad, Margot is focusing on working with auteurs like David O. Russell, Wes Anderson, Damien Chazelle and Greta Gerwig

Robbie seems to be trying her hand at new things after two recent unsuccessful comic book films, as last year’s The Suicide Squad was also a disappointment at the box office that failed to make its original budget back.

The Once Upon A Time In Hollywood star has also left herself room to straddle big budget franchises and director-driven projects by playing the title role in Little Women director Greta Gerwig’s upcoming Barbie movie.