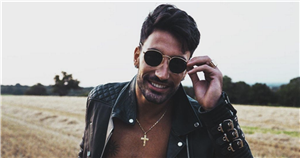 Love Island star Maura Higgins and Strictly Come Dancing's Giovanni Pernice have sparked romance rumours after they both appeared to stay at the same Cornish hotel for a mini break.

After we recently spotted newly single Maura, 30, and Giovanni, also 30, had started followed each other on Instagram, the Love Islander posted a snap of the gorgeous views from the hotel at the weekend.

Maura shared a picture of the beautiful blue sky and view of the sea on her Instagram story with the caption: "Pretty."

Another guest, named Gail Muller, who stayed at the hotel, Polurrian on the Lizard, also shared a snap of a sunset as she wrote: "Ooh and finally finally you just never know who you'll spot at a place like @polurrianonthelizard!! I spotted two Love Islanders and a rather well known dancer.

"But I was much more into these views in the stunning Cornish weather," they added.

OK! has approached Giovanni and Maura's representatives for comment.

Giovanni was also seen posing for pictures with fans outside of the beautiful hotel.

The Polurrian on the Lizard is a stunning modern abode set atop a spectacular clifftop setting.

Anyone staying at The Polurrian can also enjoy delicious food from local Cornish suppliers, with incredible sea views.

And for a spot of relaxation, the hotel also offers spa treatments, such as an age defying facial and a deep tissue massage.

Maura has been enjoying the single life since her shock split from former Islander Christopher Taylor, spending time with her bestie Molly-Mae Hague.

Last month, the star and her ex boyfriend Curtis Pritchard came face to face in an "awkward" encounter at Thorpe Park.

The pair both attended the launch of the Black Mirror Labyrinth live experience but sources said they didn't acknowledge each other.

"Curtis was already in the VIP area with his brother AJ when Maura arrived with her friends," a source told OK!.

"Soon after Curtis and AJ left the area and walked right past Maura. They didn’t even acknowledge each other and it was all rather awkward."

They went on to say: "Maura glanced around at the pair before turning back to her friends and appearing to discuss her former boyfriend.

"Curtis and AJ later returned to the VIP area and Curtis and Maura were stood in the same group with other fellow Love Islanders like Danny Williams, but they weren’t talking to each other. It appears they haven’t remained on friendly terms at all.”