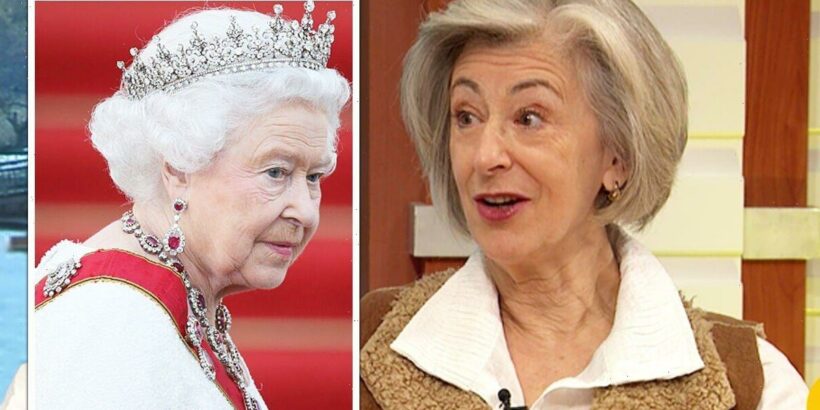 Dame Maureen Lipman and staunch royalist slammed “champagne socialists who long to abolish the monarchy”. The on-screen star, who plays Evelyn Plummer on the ITV soap Coroantion Street, has shared her admiration for Queen Elizabeth II in her new column.

But her recent comments have sparked a furious backlash online after the 76-year-old expressed her thoughts about the royals.

Maureen said the Queen has “led by example” and has remained a constant figure through 14 Prime Ministers.

The on-screen star emphasised that while the monarch is not outwardly political she has shown support through subtle gestures.

For instance, after Russia’s invasion of Ukraine, there were yellow and blue flowers on the table beside her during a broadcast.

Maureen began: “I make no bones about it. I am a Royalist. I love and respect Queen Elizabeth more than any other world figure.

“To those who want a republic, wish we were headed by one of the cast of Love Island and fail to see the irony of having a head of state who changes every four years from bluff man in flat cap to toff in trews and sends Katie Price or James Corden to launch a ship, I say on your own crown be it.”

Adding in her column for The Daily Mail, Maureen went on: “Oh, you Corbynistas and Champagne Socialists yearning for the final days of Royalty’s privileges, why not walk a mile in her shoes?

“See how much you value your own freedom from duty and responsibility and how wearisome it is to be the guardian of the Church and all the traditions and heritage of an entire country and still be current and aware of every changing trend in a multicultural land.”

Her comments have since sparked fury online as some social media users hit out at the actress.

Journalist Ash Sarkar commented: “I can’t ‘walk a mile in the Queen’s shoes’, on account of it being a hereditary monarchy. Which I want to abolish.”

@wildtrousers penned: “When Maureen Lipman can walk the 8km a day in the workboots on my swollen feet, then she can lecture me about the Queen.”

@bellapup remarked: “Walk a mile in the shoes of any one of millions of people struggling to get by every day.”

However, others agreed with Maureen’s stance, as @confidencenac wrote: “Maureen Lipman is trending and upsetting the socialists because of her appreciation of the Queen. Well done Maureen! #QueenElizabeth #jubilee2022.”

@rubba added: “Maureen Lipman has gone up in my estimations.”

Maureen is an English actress, writer and comedian.

She trained at the London Academy of Music and Dramatic Art and her stage work has included appearances with the National Theatre and the Royal Shakespeare Company.

The actress currently stars in Coronation Street and has also made regular appearances on Celebrity Gogglebox.

She has previously been vocal about her stance on former Labour leader Jeremy Corbyn.