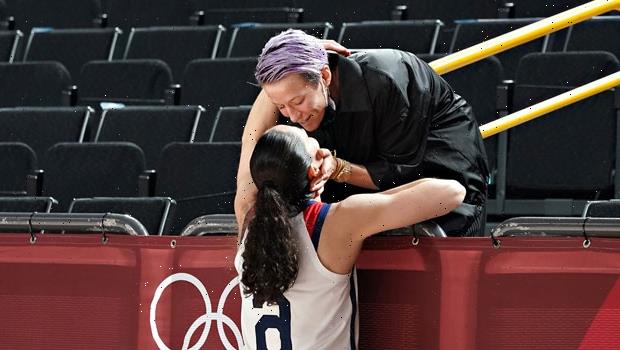 Megan Rapinoe congratulated her fiancée Sue Bird with a sweet smooch after cheering her on from the sidelines during her final basketball game with Japan, and took to Instagram to share a loving message.

Megan Rapinoe, 36, and Sue Bird, 40, showed off their love during the final day of the Tokyo Olympics on Aug. 7. The engaged lovebirds shared a kiss after Sue won her fifth Olympic gold medal with Team USA during a basketball game against Japan and excitingly ran up to her fiancée in the stands. Megan sweetly held Sue’s face as she smiled to her in the glorious moment and they both embraced as onlookers cheered. 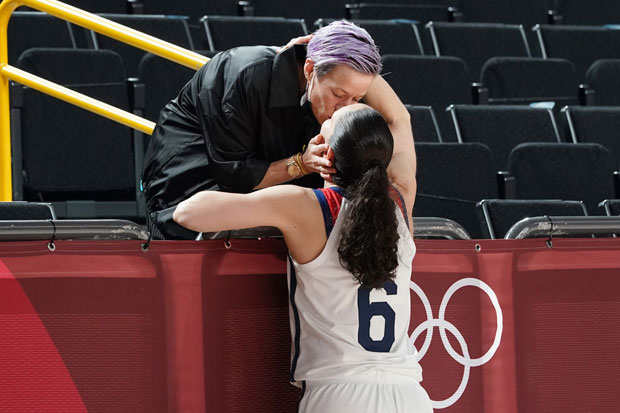 Soon after the epic win, which happened when the U.S. beat Japan with a score of 90-75, both ladies took to Instagram to share posts of the special occasion. Sue reposted several shout-outs she was getting from other users, including pics and video clips of her kiss with Megan, and Megan shared a pic of the kiss on her own page along with a loving caption. “I am so proud of you @sbird10 ❤️. As if I could love you any more🥰. Congrats baby! 🥇,” the caption read. 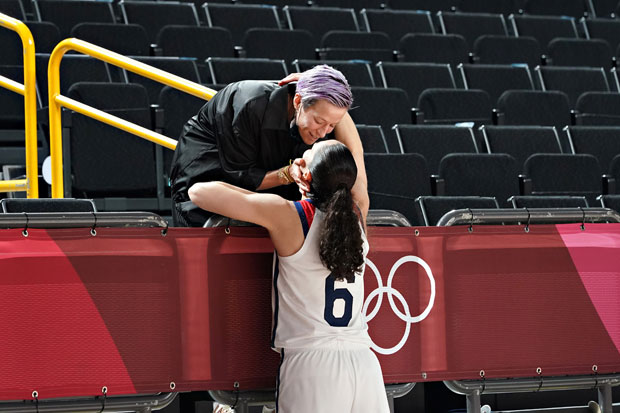 Sue’s fifth Olympic gold medal win makes her one of only two basketball players ever to win five Olympic gold medals. The other is player to achieve the feat is Diana Taurasi, who also competed during Saturday night’s game. Both Sue and Diana made their Olympic debut at the 2004 Olympic games in Athens and they’ve played in every Summer Olympics since then, winning all 28 of the games they’ve competed in, the Associated Press reports.

Like her athletic career, Sue’s personal life took a happy turn when she met Megan, a professional soccer player who won gold with the U.S. team at the 2012 London Summer Olympics, at the 2016 Olympics in Rio and they started dating. They got engaged in Oct. 2020 and have seemed inseparable, often sharing love for one another on social media.

Megan shared how proud she was of Sue for being a flagbearer for the U.S. delegation at the opening ceremony for the Tokyo Olympics last month. “Beyond words. I am so proud of you Sue. What an honor it is to have you lead us @teamusa and all of America back home. 🇺🇸 You are, simply the best. ❤️,” she wrote alongside a pic of Sue with the flag.