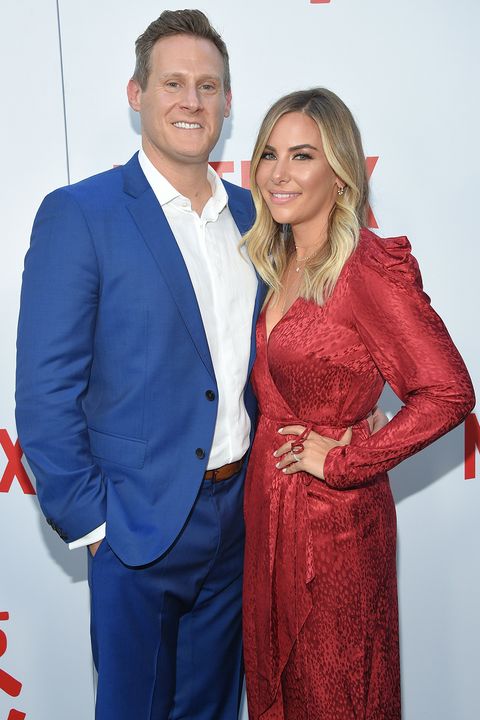 Meghan Markle’s first husband, Trevor Engelson, got married to Tracey Kurland, a nutritionist, over the weekend, the Daily Mail reports. The couple had a low-key ceremony at a private home in Hidden Hills, California, according to the site.

The nuptials—which took place almost five months after Meghan and Prince Harry’s royal wedding—were so secretive that barely any photos from the event surfaced online. But a few Instagram Stories captured by the Daily Mail give a glimpse at Engelson and Kurland’s big day.

The images show Engelson wearing a light pink shirt under a gray-blue suit, with the bride in an off-the-shoulder, knee-length white dress with layered gold bracelets. She wore her hair in loose ombré waves.

Markle and Engelson were married from 2011 to 2013. They had a getaway wedding in 2011 in Ocho Rios, Jamaica with 102 guests, according to Us Weekly. For the beachfront nuptials, the bride wore a strapless sheath gown with a notch neckline and bejeweled belt. The laid-back, bohemian-inspired look was fitting for the shoreside venue, but a far cry from the Givenchy Haute Couture gown Markle had custom-made for her royal wedding to Prince Harry.

Engelson’s engagement to Kurland was reported in June, just weeks after Meghan and Harry tied the knot. The producer announced the news on Instagram, although his account is private. “Luckiest guy I know! Get ready to party!” he wrote in a post.

Meghan and Harry have been to a number of weddings together since becoming a couple; they attended a friend’s nuptials months after celebrating their own and are expected to be at Princess Eugenie’s ceremony this Friday.