She’s back! Meghan McCain revealed that she’s returning to ‘The View’ after maternity leave — and it’s SOON. Find out when she’s back to spar with Joy Behar.

Mystery solved! After weeks of fans demanding to know on Twitter, Meghan McCain finally announced when she’s returning to The View after three months away from the Hot Topics table: January 4. The co-host, 35, just welcomed daughter Liberty Sage McCain Domenech and has been on maternity leave since her birth on September 28. “You guys really know how to make a girl feel missed!” Meghan tweeted on December 15 in response to a fan. “January 4th is my return date. 🙂 Merry Christmas!”

Less than a month to go before Meghan’s back on our TVs every morning at 11:00am. The Hot Topics table truly hasn’t been the same without her. It’s looked a little different his year — the co-hosts are all still mostly broadcasting at home over Zoom, save for Sara Haines, who’s in the studio in Manhattan. Meghan, who was quarantining in her home state of Arizona, stuck it out until literally a couple days before she gave birth.

Love her or hate her, it’s undeniable that the controversial co-host brings some much-needed spunk to the show. As the lone conservative on the show, she consistently battles with her more liberal peers — especially Joy Behar, an outspoken Democrat. While Ana Navarro, who has more conservative beliefs consistently filled in during Meghan’s absence, there were none of the drag-out screaming matches that we became accustomed to. 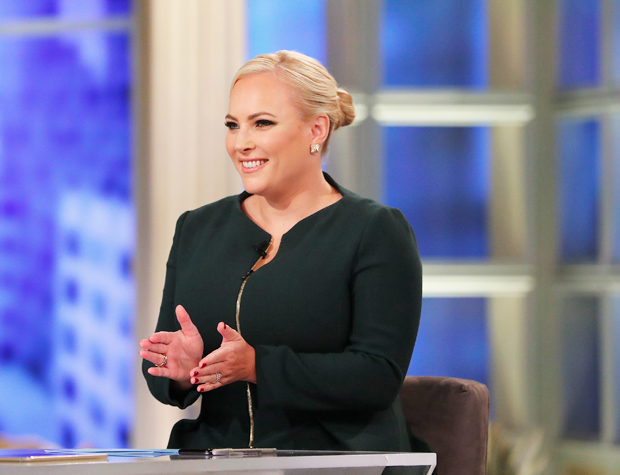 Meghan promised on Twitter that motherhood hasn’t softened her… at least when it comes to her fierce opinions. “I promise I haven’t lost my edge and I’m still an ice queen,” she tweeted, poking fun at her nickname by including a gif of Elsa from Frozen. “But how are baby noises and baby hands so wildly entertaining?! Motherhood is a wonderful cliche, please keep the ‘I told ya so’s’ at a minimum for my ego.”