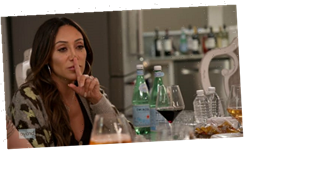 RHONJ viewers have seen Teresa Giudice threaten to blow her “casket” … her words, not ours … this season.

While some of her anger is understandable, a lot of viewers think that she’s in the wrong.

Some of her fellow Housewives agree, including sister-in-law Melissa Gorga.

And she admits that she often finds herself at odds with Tre, and is not about to back down.

This week, Melissa Gorga spoke to E! News on the Daily Pop about how she’s had to manage her sister-in-law.

“That’s the story of my life,” she expressed.

Melissa described herself as “constantly trying to figure out how to tell Teresa I don’t agree with her.”

Melissa said that it’s a challenge to disagree “without her thinking that I’m going against her and ‘the fam.'”

“It’s always been difficult for me,” she admitted.

“So, it comes down to it,” Melissa explained, “we’ve been on this show long enough.”

“It’s not even about that anymore,” Melissa stated about their reality careers.

She emphasized: “It’s about what’s right is right and what’s wrong is wrong.”

“And whether you’re my sister or my best friend or my husband,” Melissa declared, “when you’re wrong, you’re wrong.”

Obviously, this season’s conflict so far has centered upon Teresa spreading rumors about Jackie’s husband.

She claimed to have heard that Evan Goldschneider was cheating when he went to the gym.

Teresa chose to repeat this rumor to multiple people, on camera, at Evan’s birthday party.

Jackie eventually retaliated by coming up with a cruel “analogy” that would upset Teresa.

She fabricated on the spot a story about Gia, Teresa’s 20-year-old, doing cocaine.

Now, Jackie wasn’t trying to convince anyone that it was true, but Teresa flew into a rage.

Jackie did not accompany the other Housewives to Lake George because of the intense feud.

Teresa continued to bring it up nonetheless, demanding an apology from Jackie.

Jackie, in the meantime, was trying to spend time with her husband, as allegedly Tre’s rumor could hurt him professionally.

“There was a point that I was like, ‘She’s never going to leave. It’s just never gonna be,'” Melissa recalled.

“She’s just so traditional and old school,” she explained, “that it’s like, marriage is marriage, and even if you’re not happy, you stay.”

Melissa said that it was only Joe’s tragic deportation to Italy that “forced” Teresa to reconsider her marriage.

“I have to be honest with you,” she added.

“I almost feel like, if he came home, she would still be with him,” Melissa hypothesized.

“There’s a part of me that thinks that,” Melissa confessed.

“If he were able to come home,” she added, “she would’ve tried again.”

However, Melissa did emphasize that she has no doubt that Teresa “really likes” Luis.

“I want Teresa to be happy, you know?” Melissa affirmed.

“I’m so sick of talking about all the other nonsense anyway and the negatives and the sadness,” she expressed.