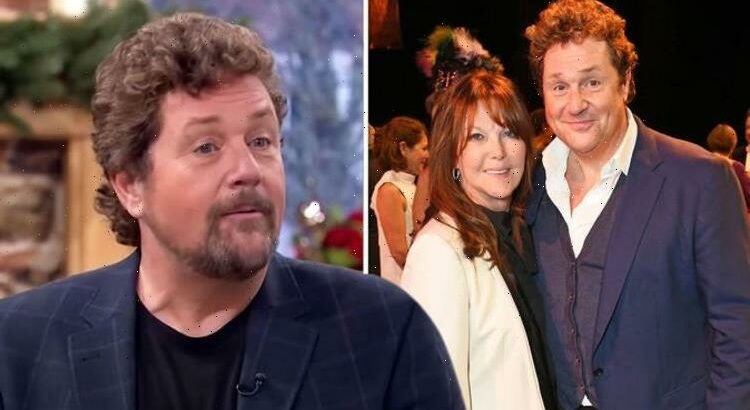 Loose Women: Michael Ball performs 'Be The One'

Michael Ball, 58, has been in a relationship with 78-year-old journalist Cathy McGowan since 1992. The pair met after she interviewed him as part of the cast of the 1989 musical, Aspects of Love. After becoming friends, they swiftly struck up a romance and have been together ever since.

Gushing over their relationship, the singer said: “Every night time is a date night time with Cathy!”

On their age-gap, he continued: “I’m too old to be a toyboy, and age has by no means been a problem or thought of.

“We’ve been together about 30 years now, and all I can say is I wish I looked as young as she does, because she looks amazing!”

Michael went on to praise his long-term partner for being his biggest supporter, adding she is “more than pleased” to focus on his career now.

“I couldn’t think about my life without her,” he added to Platinum Magazine earlier this year.

He previously told Express.co.uk that his partner is a “distinctive and great particular person” both inside and out.

The singer added people were always asking about their age gap, but he finds it “irrelevant”.

“No one would point it out if I had been the older one,” he added.

Michael tends to keep his love life out of the public eye and doesn’t share pictures of the pair on his social media pages.

However, the couple have been pictured together at public events on many occasions.

Michael and Cathy don’t have any children together, but he is a stepdad to daughter Emma, who has two children Grace and Connor.

He previously told the Mail: “I came into Emma’s life when she was in her mid-teens.

“I’ve always been in Connor and Grace’s lives. I’m godfather to both of them.

“I’m really hands-on with them and I wouldn’t have it any other way.”

Away from his family life, the singer is returning to screens with his new series, Michael Ball’s Wonderful Wales.

The broadcaster explores his own heritage while discovering more about Wales’s rich history.

Michael, who was born in Bromsgrove, Worcestershire, begins his journey in south Wales.

His mum grew up in the Cynon Valley and his grandfather and great-grandfather were both coal-miners.