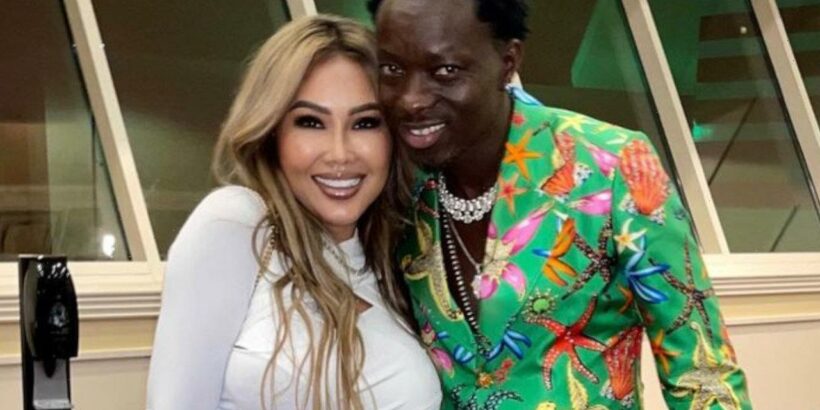 The ‘Coming 2 America’ star proposes to his on-again/off-again girlfriend on air during an interview on ‘The Breakfast Club’, gushing that he’s ‘blessed to have Rada by my side.’

AceShowbiz –Michael Blackson and Miss Rada are one step closer to being man and wife. The comedian and his on-again/off-again girlfriend have got engaged, several months after she announced their breakup on social media.

When host Charlamagne tha God asked if he would propose to her, Michael reached into his bag and pulled out a ring, before getting down on both knees to ask her to marry him. When asked why he decided that this was finally the woman he wanted to be with for the rest of his life, he said, “I’ve never had a woman that’s this loyal to me.”

Rada, meanwhile, was clearly in shock. “Bye side b***hes,” she quipped, to which Michael jokingly replied, “90% of the side b***hes bye bye.” Posting a video of the moment on Instagram, Rada wrote, “I had no idea this was going to happen….I thought he was going to ask me about side beeches @breakfastclubam are my witnesses …. I ate my vegetables for the day and said yes to karats.”

Rada also flashed her new engagement ring in a photo shared by DJ Envy. “Congrats to @michaelblackson & @mzradadarling… He just proposed live on air!!!” the deejay congratulated the couple.

Michael later shared the news to her followers on Instagram. “Meet the future Mrs.Blackson @mzradadarling,” he announced along with a photo of him with his new fiancee. He went on gushing over his future bride, “Ladies men look for loyalty, regardless of what we put you thru stay loyal to your man because we are f**k ups but we will eventually do the right thing. Nothing good come easy so trust in God and what’s meant to happen will happen.”

He continued, “I’m blessed to have Rada by my side, she’s the definition of a great woman. Most of my haters call her a gold digger but believe me Rada has never asked for penny from me, she’s very independent and she’s actually the one that takes care of me plus I’m allowed a side chick a month. Lol.”

Their engagement comes just several months after Rada announced their split. “It has been a great ride…..although I love him to death, he has internal issues that he needs to work on,” she wrote on Instagram back in May. She went on hinting that she called it quits with him because she was “lied to.”