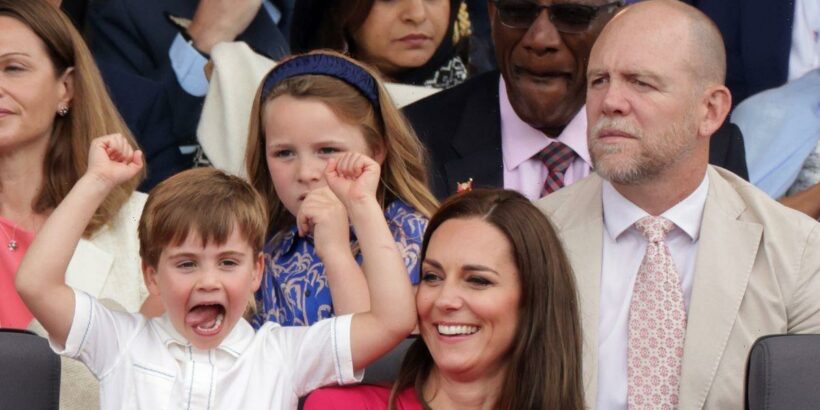 Mike Tindall has spoken out after young members of the Royal Family stole the show over the Platinum Jubilee celebrations.

Prince Louis, four, first entertained the nation during his antics on Buckingham Palace’s balcony as the family watched the Trooping the Colour parade on Thursday 2 June.

Photos of the youngster show him dramatically covering his ears from the sounds of the jets, whole he was also spotted casually having a chinwag with the Queen.

The hilarious four year old then further caused a few laughs at Sunday's Platinum Jubilee Pageant, where he was seen putting his hand over his mother Kate Middleton’s mouth as she tried to speak to him.

This sparked rugby star Mike, who’s married to Zara Phillips, to jokingly step in and give Louis some stern words.

Mike, Zara, and their two eldest kids – Mia, eight, and Lena, three – were sat directly behind the Cambridges during the festivities.

Appearing on his The Good, The Bad and The Rugby podcast, Mike was asked about his experience over the Jubilee by co-hosts James Haskell and Alex Payne.

As James and Alex noted that the kids were the “stars of the show”, Mike agreed saying: “Louis, he was just wanting to have fun. And my two are always mischievous so it's trying to keep a lid on. There were a lot of sweets out back though, so there was a real sugar high."

He went on: “It's tough for them. They're all young… it's a long time. But as any parents knows you just do whatever needs to be done.”

Mike wasn’t the only one to keep Prince Louis in check over the weekend, big sister Princess Charlotte, seven, was also spotted giving Louis some words of advice.

In a sweet insight into the dynamics between Prince William and Kate Middleton's three children, Prince George, eight, Princess Charlotte, and Prince Louis, Royal fans finally got to see the trio all together at a major official event in a carriage ride.

The Duchess of Cambridge, 40, and Camilla, Duchess of Cornwall, 74, grinned and waved to the public they joined the young royals in the carriage, which emerged from the Buckingham Palace forecourt.

But as usual the royal children stole the show, as when the carriage rounded with all three smiling and waving in varying degrees, little Louis appeared particularly excited by the spectacle in front of him.

Elder sister Charlotte suddenly started giggling and pushed the four year old's hand down on his lap, as she glanced across to her mother and smiled.