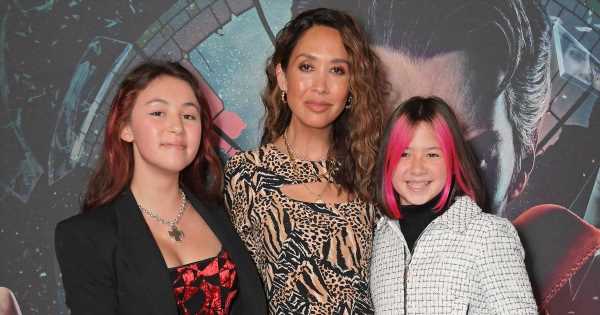 Myleene Klass posed with her two lookalike daughters as they attended a film screening in Leicester Square on Tuesday.

The presenter, 44, stepped onto the red carpet in an animal print midi dress with a cut-out and a leg split before going to see Doctor Strange In The Multiverse Of Madness at Cineworld in Leicester Square, London.

She was joined by her two daughters, Ava, 14, and Hero, 11, who both showed off their vibrant coloured hairstyles.

Myleene teamed her dress with gold jewellery and a pair of black strappy heels to complete the outfit, along with a black leather clutch, while she wore brown eyeshadow and a nude lip gloss.

Meanwhile, Ava showed off her red highlights and Hero looked adorable with the front of her hair dyed hot pink.

The former Hear'Say singer often enjoys family days out with Ava and Hero, with the three of them spotted attending a Classic FM concert at the Royal Albert Hall in London earlier this year.

She also often posts family videos to her social media, showing the three of them playing the piano together in their London home.

In recent weeks Myleene has taken the time to share a video explaining what to do if your baby is choking, as well as showing her family learning how to do CPR.

This comes after both Ava and Hero had close calls with choking when they were younger, as she detailed in her new book, They Don't Teach This At School.

In an excerpt, which was published in The Sun earlier this week, Myleene wrote: "A couple of years ago we were relaxing on holiday and my defences were down, so when Ava started to choke on calamari I didn’t immediately realise.

"Hero choked on a small plastic star when she was one and a half."

The presenter and radio show host then went on to describe what to do when someone is choking, and shared a step-by-step guide to performing CPR.

The book covers a number of other important things, such as reminding people to 'stop, drop, and roll' if they become engulfed in flames, as well as talking about how to treat jellyfish stings and how to recognise the signs of a stroke.

Myleene has been vocal about first aid in the past, speaking about how it is vital to teach it in schools and was a part of an awareness campaign with St John's Ambulance last year.

For updates on all your favourite celebs and TV shows, sign up to our daily newsletter here .