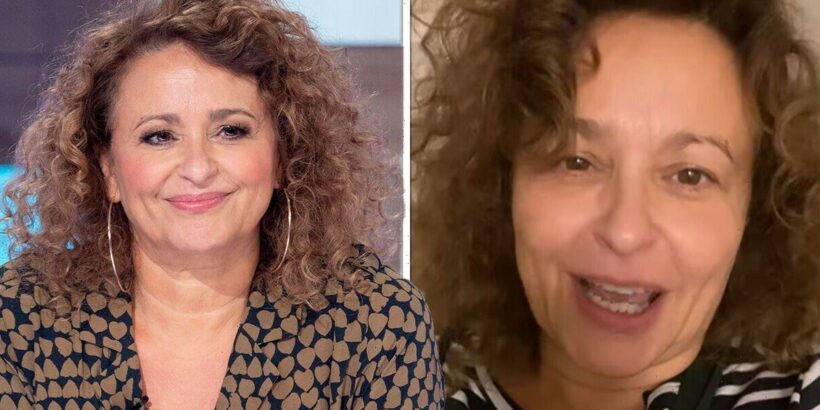 Speaking exclusively to Express.co.uk Nadia Sawalha, 57, shared that in the beginning of Loose Women, certain topics such as menopause were too taboo to speak about on the show, so much so that previous editors and bosses would stop the women from sharing details of of their experiences. It wasn’t until Loose Women got a new boss that talking about menopause was encouraged on the ITV daytime chatshow.

“I am proud to be the a part of the first show to talk about menopause,” Nadia explained.

“When you when you go into menopause, I had so many symptoms, and none of which that I knew was the menopause.

“My mother’s never spoke about menopause because it’s something you have to hide and yet to not say anything about.”

Having grown up not knowing anything about the effects of ageing, Nadia soon realised that she was not alone in thinking like she did, but even when she spoke to her co-stars off-screen they were not allowed to put their conversation on television.

She continued to say: “Even at Loose Women when I finally realised why I couldn’t remember anything and that I was bleeding like crazy was because of my menopause and not cancer and not Alzheimer’s, and all these other terrifying things that I thought it was.

“Once I knew it was the menopause and I was talking to the others and bosses would say, ‘God don’t say you’ve got menopause, people don’t want to know about that’.

It wasn’t until Loose Women got a new boss that attitudes started to change, opening up the conversation for menopause.

Nadia added: “Then we got a new boss and she said ‘What we need to be talking about in the show is the menopause. Because we’re an all woman show’

“She was brave enough to say yeah, let’s do it.”

Nadia recalls first starting to speak about menopause on Loose Women back in 2015 and to her delight many of the viewers reached out to her, glad that she was speaking so openly about the topic.

“We really were the first show to go into detail about menopause and how it feels,” Nadia said.

“Still now we talk about it on a regular basis and it always rates well and we always get so many messages in.

“I mean there’s something like over 100 symptoms attributed to the menopause. I’ve got dry scratchy eyes, but I have also got dry itchy skin, you know your libido goes out the window.

“Some people get hair loss, weight gain, it can be truly awful.”

Remaining passionate about keeping the conversation surrounding menopause going, Nadia went on to day that in her own personal experience she was put off going to the doctor as she thought she may be diagnosed with Alzheimer’s.

“I was so sure I had it,” Nadia explained, before going on to say that she now realises other women like Davina McCall went through a similar experience.

She finished by saying: “I was a bit unlucky, but not as unlucky as some others, they can literally lose their mind.”