Yesterday, the Speaker of the House of Representatives arrived at the House Chamber wearing the same black dress that she wore in late 2019 for the first impeachment of President Donald Trump. Her message, via fashion statement, was heard loud and clear: Trump’s wrongdoings are as serious this time (if not more) as they were the first. And clearly, that message was heard round the House. A majority, including 10 Republicans, voted to impeach the president and charge him with “incitement of insurrection” following last week’s riots at the Capitol building in a 232–197 vote.

Pelosi’s repeat outfit was a demure, three-quarter-sleeved black dress with a mandarin collar. Due to the ongoing coronavirus pandemic this time around, Pelosi also wore a protective face mask in a blue floral print and the same gold collar necklace from years prior.

When Pelosi wore the ensemble for the first time back in 2019, she paired it with a gold pin in the shape of the Mace of the United States House of Representatives (oftentimes referred to as the Mace of the Republic), which was created by Washington, D.C.–based jewelry designer Ann Hand. For this go-around, however, Pelosi nixed the adornment. 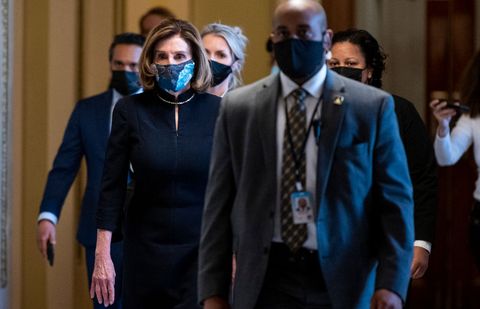 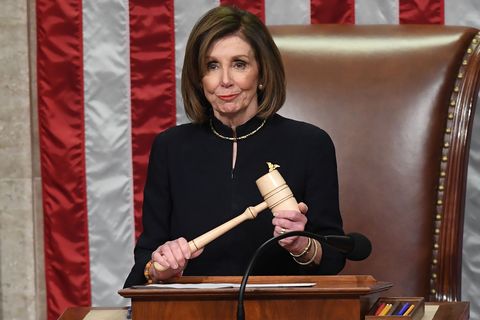 People were quick to quip on Twitter the second they noticed the sartorial revival. Some credited the repeat look as a good-luck charm, since the House voted to impeach Trump successfully the first time. Others saw it as a swift lesson in the art of rightful pettiness. And then, some viewed Pelosi’s fashion choice as a reminder that here we are again, debating another moment of President Donald Trump’s misconduct.