The very racy diary of ‘Gentleman Jack’: Extraordinary life of lesbian heroine who dressed as a man, owned coal mines andslept with loaded pistols under her pillow is revealed in new drama

As a town councillor, a devout Catholic, and the owner of a large estate, John Lister was the pillar of the community in Victorian Halifax. His family seat was the magnificent Tudor half-timbered Shibden Hall, where he had lived for 40 years since 1855, when he was eight years old.

While growing up, Lister was always aware of the legacy of a relative who had died in 1840 — seven years before he was born — as she had spent much time and money improving both the house and its extensive grounds.

Her name was Anne Lister, and although John had heard tales about her eccentricities as a spinster, there was much that he did not know.

Thankfully, Anne left her diaries — 26 volumes containing four million words. One day in the mid-1880s, John Lister removed them from behind a set of panels where they had been kept and went through them.

He soon realised that not only was his relative an extraordinarily dynamic woman — who single-handedly managed the estate, even ran a coal mine, and travelled extensively — the diaries were also a rich source of social and local history, and he persuaded the local newspaper to run extracts from them for nearly five years. But the diaries also contained a mystery.

Throughout the thousands of pages, there were hundreds of entries written in a secret code. Intrigued, Lister tried to crack the code — which consisted of numbers, Greek letters, and symbols — but he failed.

Lister asked a schoolteacher from Bradford called Arthur Burrell to help. Burrell took a volume back home, and after a few days, he returned to Shibden and told Lister that he thought he had managed to crack the code for the letters ‘h’ and ‘e’. Together, the two men soon identified the word ‘hope’ in one coded passage.

‘With these four letters almost certain,’ Burrell later recalled, ‘we began very late at night to find the remaining clues. We finished at 2am.’

What the men found shocked them. In Burrell’s words, the material was ‘unpublishable’ and ‘very unsavoury’.

He said: ‘It is an intimate account of homosexual practices among Miss Lister and her many “friends”; hardly one of them escaped her.’ 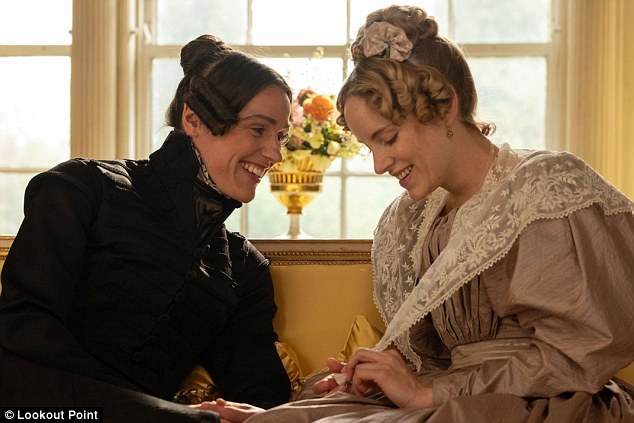 Throughout the thousands of pages, there were hundreds of entries written in a secret code

Considering the extreme details of these ‘friendships’ described by Anne Lister, Burrell recommended that they should be burned.

If the contents were discovered, it would not only tarnish the memory of Anne Lister, who, like John, had been a leading member of Yorkshire society, but it might also bring scandal to Lister himself. But he refused to burn the diaries, and locked them behind the panels, where they remained until his death in 1933, after which Shibden — and the diaries — passed into the hands of the Borough of Halifax because of Lister’s bankruptcy.

The only man who knew how to solve the code was Burrell, and before his own death, he entrusted the key to the code to the town’s chief librarian, who locked it in his safe.

As a result, Anne Lister’s lesbianism stayed hidden for many decades to come.

But now, thanks to a new BBC drama series currently being filmed, the secrets will be made public about this most extraordinary figure, who was nicknamed ‘Gentleman Jack’ because of her masculine appearance and clothing.

Starring Suranne Jones — hardly the most masculine of actresses, and best known for her role as the vengeful GP in the TV drama Doctor Foster — the eight-part BBC series will chart Lister’s life and loves, and her attempts to marry her long-term lover, an unthinkable idea in early 19th-century Yorkshire.

Lister is today regarded as a lesbian heroine. Although she may have largely kept her sexuality secret, the coded passages of her diaries show that she had no qualms in exploring her lesbianism from the age of 15 until her death at the age of 49 when she was travelling in the Caucasus. 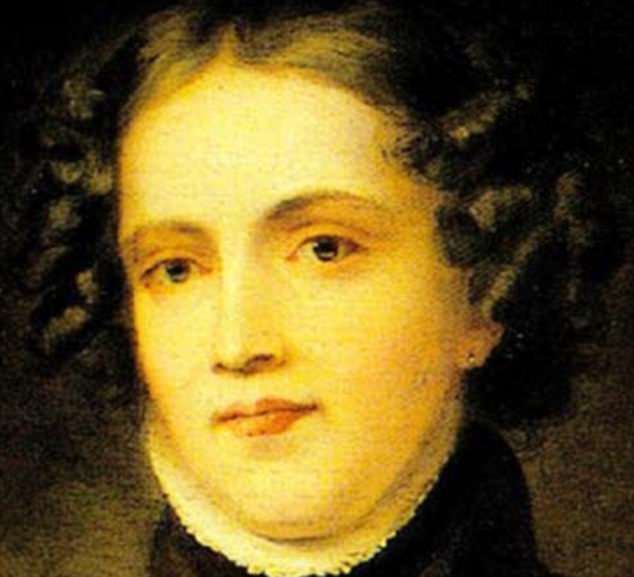 But there was a lot more to Lister than her sexuality. Born in Halifax in April 1791, her father Jeremy was a former soldier who had fought and was wounded in the American War of Independence

But there was a lot more to Lister than her sexuality. Born in Halifax in April 1791, her father Jeremy was a former soldier who had fought and was wounded in the American War of Independence. Educated at home until her early teens, Anne was sent to board at Manor House School in York, where she met her first love, Eliza Raine.

The two girls shared an attic bedroom called ‘the Slope’. ‘This made the union an easy one,’ says Helena Whitbread, one of Lister’s biographers. ‘Anne eagerly stepped into her lesbian sexuality.’

It was around this time that Anne began her diary, in which she recorded her most private thoughts.

‘I am resolved not to let my life pass without some private memorial that I may hereafter read, perhaps with a smile, when Time has frozen up the channel of those sentiments which flow so freely now,’ she would write.

Those sentiments were certainly strong. Even in the first entry, in August 1806, the 15-year-old Anne records how she was missing Eliza, and how they exchanged three letters in six days, until on 18th of that month came ‘a parcel from her — Music, Letter & Lavender’. Despite their evident fondness for each other, it appears that Anne and Eliza were not shy of playing the field. In October 1808, Anne wrote — in code of course — about spending the evening with a Miss Alexander:

‘Drank tea at Mr A’s and supped also — after tea, at Eliza’s instigation, I had Miss A on my knee, kissed her.’

It appeared that Anne was more comfortable with such raciness than Eliza, for, according to Helena Whitbread, Anne’s affairs with other women drove Eliza literally mad, and she was never to recover.

As Anne emerged into adulthood, people in Halifax began to notice the masculinity of Lister’s appearance, and her habit of always wearing black clothes. Today, she might be called ‘butch’, but back then, she earned the nickname of ‘Gentleman Jack’.

Anne once noted in her diary an observation made about her by a ‘Mrs B’: ‘What a pity that she does not pay more attention to her appearance, for those who do not know her judge from this . . . ’

There was no doubt Anne was attracted to rather more manly pursuits than drinking tea with refined Yorkshire ladies. A particularly keen shot, she slept with two loaded pistols under her pillow, which, along with a sword, she at least once intended to use against a nocturnal trespasser.

‘I stood ready to put into execution what seemed really necessary,’ she wrote, but Anne’s mother managed to shoo the man away with words rather than with a hail of lead from her tomboyish daughter.

There was also something of the geek about Anne. She meticulously recorded the daily air temperature and pressure, as well as the precise time she took her readings.

According to another biographer, Jill Liddington, by time she was 20, Anne ‘had already started obsessively recording exactly how many hours she spent on each activity’.

The precise length of sermons was noted to the minute, and she would read dull but worthy books on subjects such as improving the postal service, while she walked around the estate.

In men, she had no sexual interest whatsoever. ‘I love & only love the fairer sex & thus beloved by them in turn, my heart revolts from any other love than theirs,’ she wrote in January 1821.

After she split from Eliza, her next great passion was for Isabella ‘Tib’ Norcliffe, who was keen to settle down with Anne for life. However, Lister’s feelings were somewhat more cool.

‘Ah, my Isabel, you have indeed loved me truly &, after all, perhaps it may be fate that you & I shall get together at last,’ she wrote in June 1817. ‘But on this subject, I dare not think. God knows what is best.’

What turned out to be best for Anne was a severance — although they remained occasional lovers.

Her next passion was a woman named Mariana Belcombe, with whom Anne had a passionate affair, which continued even after Mariana got married. However, it appeared that Mariana’s husband was no more faithful than his wife, and after he contracted a venereal disease from a servant, he passed it onto Mariana, who in turn passed it on to Anne. Lister would describe the symptoms in her diary — very graphically — and she would remain infected until her dying day.

But Anne was much more than a lover of women. When she inherited the family estate in 1826, she proved herself immensely capable of running it. Though it was only 400 acres, the estate made a good income from timber, turnpikes (toll roads), rents, shares in a canal, and providing stone and water.

What the land was also blessed with was coal — a vital ingredient in the industrial revolution — and rather than lease out the land to be mined by a tenant, Anne established two collieries of her own. Despite Anne being a tough businesswoman and a lesbian, any attempts by feminists today to claim that she had ‘progressive’ politics or enlightened social attitudes would be fruitless. Like most Yorkshire landowners at the time, she was very traditional.

‘Anne was a staunch conservative with very decided views about the positive role of the monarchy, the Church and Toryism in Britain,’ according to Whitbread.

On December 6, 1819, Anne recorded how she had scoffed at an article in the Manchester Observer — a forerunner of the Manchester Guardian, which in turn would become today’s Guardian — about ‘Rights of Women’ and calling for women to have the vote.

‘What will not these demagogues advance, careless what absurdity or ruin they commit!’ she thundered in her diary. Of course, had women enjoyed the rights they do today, then Anne would have been free to marry her final long-term lover, Ann Walker, who went to live with Lister in 1834.

The nearest the couple got to wedlock was a church blessing of their friendship, which would have been unusual enough at the time.

Thanks to a healthy bank balance, the couple were able to indulge their love for travel. Lister was the first woman to climb Monte Perdido in the Pyrenees, and more impressively, in 1838, she became the first person to ascend Mont Vignemale, the highest peak in the French Pyrenees. Today, a memorial to her achievement stands high on its slopes.

But her wanderlust proved to be her nemesis. The next year, she and Ann set out on an epic journey to Georgia across Europe.

In September 1840, she contracted a fever, and died near Tbilisi. Her body was embalmed and returned to Halifax, where she lies in the Lister family vault in St Anne’s Church, Southowram.

Her life had been a remarkable one, but it would not be until the 1980s, with the publication by Whitbread of the first volume of Lister’s diaries, that the world would know of Anne’s secret life.

Some even believed the graphic passages were a hoax, but a perusal of the diaries themselves shows them to be true.

Throughout her life, Anne was certainly aware of her individuality. ‘I am not made like any other I have seen,’ she once wrote. ‘I dare believe myself to be different from any others who exist.’

She was most certainly that.

Gentleman Jack is due to be shown on BBC One this autumn.