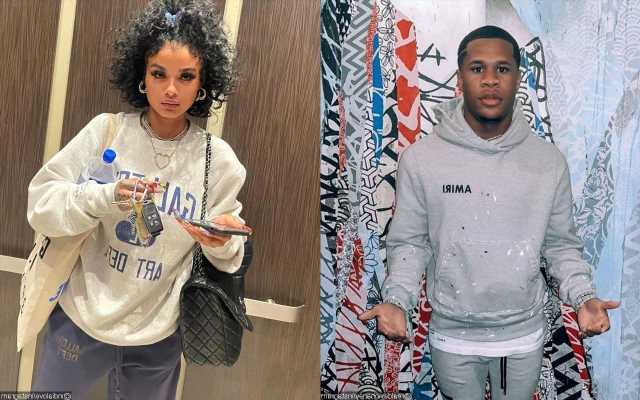 In a video circulating online, the 22-year-old professional boxer can be seen putting his hands on the internet personality’s lower backside while she wraps her arms around his neck.

AceShowbiz –Devin Haney appeared to have moved on with India Love. The professional boxer, who broke up with his girlfriend months prior, has sparked romance rumors with the internet personality after they were caught on camera getting cozy.

In a video circulating online, the 22-year-old could be seen hugging his rumored girlfriend at what seemed to be a party. He put his hands on her lower backside as she rapped Andre Benjamin‘s verse from UGK and Outkast‘s hit single “Int’l Players Anthem (I Choose You)”.

India herself wrapped her arms around his neck as she continued to rhyme the verse. The alleged lovebirds appeared to be enjoying each other’s company.

The dating speculations between Devin and India emerged earlier this week. At that time, he shared a video of himself in an elevator with a woman who was believed to be the social media influencer.

Before being an item with India, Devin was in a romantic relationship with Jania Meshell. However, the former pair called it quits in May.

Jania, who shares one son with NBA YoungBoy a.k.a. YoungBoy Never Broke Again, confirmed her single status on her Instagram Story. At that time, she let out a quote that read, “after experiencing ‘feelings’ i have decided that this just isn’t for me but thank you for the opportunity.” On the top of it, she penned, “Single 4Life I promise this time.”

Jania went on to unveil the reason behind her split from Devin. She wrote in another post, “PSA you’re not allowed to go to the club or have fun while in a relationship so if you wanna enjoy yourself it’s best you stay single.”

As for India, she was previously linked romantically to Roddy Ricch. In February 2020, she shared a video of herself soaking up the sun while the Compton rapper walked in front of her. However, was quick to clarify that they “aren’t together.” She went on, “I apologize for the accidental video post that led to that assumption.”