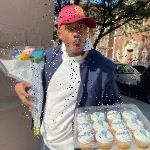 Nick Cannon is in the news again. And no it is not because he is having another baby. Since Nick has had four children in the last year from three different women, I thought any news coming from his camp would include another pregnancy announcement. After getting dragged by the public, Nick has decided to listen to his therapist. Well sort of. Nick, whose syndicated talk show premiered yesterday, told ET that he decided to take a break from having kids after his therapist told him that he should be celibate. Nick interpreted that to mean stop impregnating the ladies. Below are a few more highlights via People:

“I’m not sitting out here planning it. My therapist says I should be celibate,” Cannon, 40, told the outlet, adding in jest, “Okay, give me a break bus. I’m [gonna] take a break from having kids.”

Cannon continued, “I come from a big family, I have several siblings, [and] being raised in an unorthodox family by my grandparents at times, I’ve experienced such a wide range of upbringing that I have such a love and passion for kids and family. I want a big family too. The Lord has blessed me with what I asked. Ask and you shall receive.”

The star added that he wants to be “transparent” about his personal life on his syndicated talk show: “[I’ve] never been a person that’s shied away from talking about my life. But I want to refocus it on others. I’m gonna be talking for an hour each and every day, hopefully, people get to know me in a very intimate way. If I’m in the headlines the night before, I’m definitely talking about it the next morning.”

I know this may not be popular but I have to say that at least Nick is intentional about growing his family. Yes, it seems chaotic but none of the women in this situation are fighting each other or Nick and they all seem to happy with the arrangement. Nick is definitely not Future and I am no one to judge other people’s life choices if it isn’t harming anyone. There are several ways to create a family and this is the one he has chosen. However not having sex is not the equivalent of not having babies. Yes, you need one for the other but sex can also be used for pleasure and not procreating. As my therapist friend asked, why is Nick afraid of death? This seems to be driving his need to procreate. Also why is he equating procreating with his sexual activities? Can he do one and not the other? Anyways, Nick continues to surprise me. I guess he is no longer that square and corny dude who was once married to Mariah Carey. Instead he is creating the life he wants, albeit an unconventional one. Hopefully, as Nick continues his therapy path, he will understand that he can have sex without having babies.