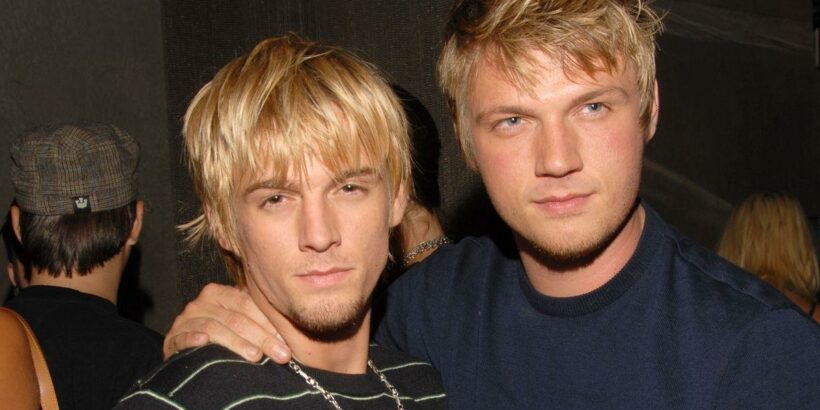 Alongside a collage of pictures of the two boys growing up together, Nick, 42, talked of his devastation after Aaron, 34, was found dead in the bath.

Nick wrote: "My heart is broken. Even though my brother and I have had a complicated relationship, my love for him has never ever faded.

"I have always held on to the hope that he would somehow, someday want to walk a healthy path and eventually find the help that he so desperately needed."

Former child star Aaron, who was the father of an infant son, had his share of controversy as well as several run-ins with the law.

His relationship with his siblings was strained over the years and in 2019 Nick filed a restraining order against him, alleging he threatened to kill his pregnant wife and unborn child.

Aaron acknowledged the restraining order on Twitter at the time but denied the allegations of threatening behaviour.

He also had a history of drug convictions and reportedly went to rehab on a number of occasions.

Nick alluded to this difficult past, writing: "Sometimes we want to blame someone or something for a loss, but the truth is that addiction and mental illness is the real villain here. I will miss my brother more than anyone will ever know. I love you Chizz. Now you can finally have the peace you could never find here on earth….I love you baby brother."

Aaron first found fame as a child star in the 1990s, and got his start opening for the Backstreet Boys on a 1997 tour. Later that year he released his self-titled debut album.

His second studio album, Aaron’s Party (Come And Get It), was released in 2000 and went triple platinum by the Recording Industry Association of America.

It featured the singles I Want Candy, Aaron’s Party (Come Get It) and That’s How I Beat Shaq and he supported the album for several concerts by the Backstreet Boys and for Britney Spears on the Oops!… I Did It Again tour.

Aaron also tried his hand at acting, guest starring on shows including Lizzie McGuire and making his Broadway debut in 2001 as JoJo the Who in Seussical The Musical.

He made the move to rap music in recent years, throwing off his child star image with a number of face tattoos.

The singer welcomed his first child Prince with Melanie Martin in 2021.A representative of Aaron's team confirmed his death on Saturday and said they are still determining the cause of death.

In a statement, they said: “We are extremely saddened and shocked to confirm the passing of Aaron Carter today.

“At the moment his cause of death is being investigated. We ask that you give the family time and they will have more information when available.

“We cannot express the outpouring of love coming in.”