Snooki is a giving fans a glimpse into the bedroom she shares with her husband and the father of her three children, Jionni LaValle.

In a preview for the Aug. 25 episode of MTV’s Cribs revival, Nicole “Snooki” Polizzi shows fans where all the magic happens. The Jersey Shore star, who’s already a mom to sons Lorenzo, 8, and Angelo, 2, and daughter Giovanna, 6, gives viewers a look inside the bedroom she shares with her husband and the father of those three children, Jionni LaValle. And while doing so, she makes a surprising reveal.

“I had to have leopard on my bed. I definitely want another baby, so this is where it’s gonna be, this is where it’s gonna take place,” Snooki, who recently returned to Jersey Shore: Family Vacation after leaving the series, says in the preview video above, while showing off her bedroom with her sexy pajamas on and a big glass of red wine her in hand. 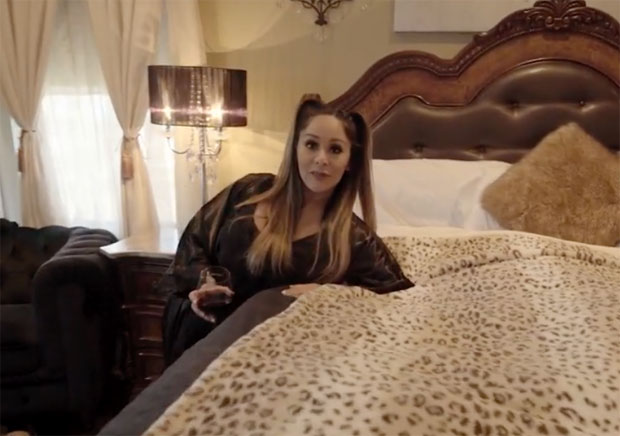 But that’s not all — during the 27-second clip, Snooki also shows viewers a tribute to her late cat Rocky, who passed away in 2013.

“A lot of people do come in my room and they’re like, ‘Why do you have a picture of your cat?’ This is my best friend brother,” she explains. “I got Rocky when I was 13 and then he died. Anytime that I’m sad or upset, I just turn around and look at Rocky and he’s watching over me in his angel suit.”