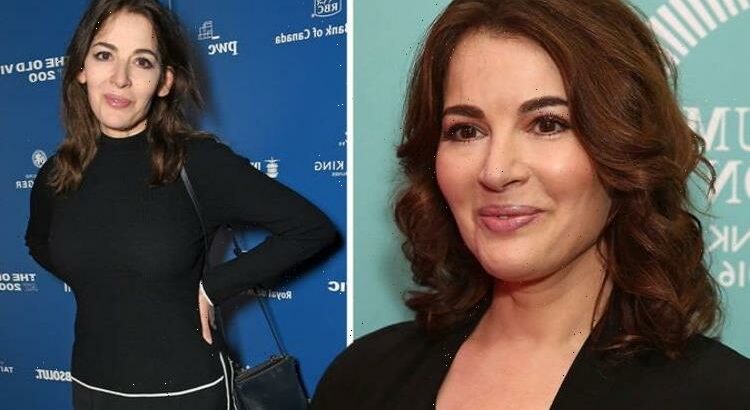 Celebrity chef Nigella Lawson, 61, is known for her peculiar and sometimes controversial recipes, so her secret to losing weight after Christmas may come as a surprise to many. And the answer is indulging in even more food.

As a new year begins, so does the annual food regret, but Nigella believes those wanting to shift their festive pounds should “eat well” in controlled portions and not deny themselves culinary pleasure by dieting.

In a recent interview, she explained her theory: “I have always found self-denial one of the more charmless of the virtues.

“I suggest, rather, a streamlined voluptuousness – in food and, as it happens, for me.

“I love food too much not to eat a great deal of it.”

So instead of takeaways, Nigella opts for luxurious dinners to burn off the weight she may have gained over Christmas, through a range controlled portions of vegetable and flavour-heavy meals.

One tip for those looking to blast those unwanted pounds was to put different elements on separate plates in order to make those meals stretch.

She told British Vogue: “It helps not to feel deprived if you make each meal last longer.

“Staggering the various components rather than eating them all on the same plate at the same time gives you a sense of eating more than you are.

“The trick is not to become bored and therefore to use as varied a collection of vegetables as possible. “

While Nigella’s recipes usually have fans drooling, as we were gearing up for Christmas many were left unimpressed by one dish she curated that consisted of pig trotters, mash and a side of kale.

The 61-year-old chef admitted it wasn’t entirely cooked by her as the pig trotters, a treat often fed to dogs, had been pre-made.

Sharing the details to her Instagram page, which has a staggering 2.6 million followers, she wrote: “I know this hardly looks like my kind of cooking, but that’s because it isn’t!

“Along with my @hgwalter butchers’ order, I got a heavenly premade (by @pierre.koffmann, no less) pig’s trotter with proper French mash and Madeira gravy (oh, ok then: jus).”

Nigella said she steamed and sliced the trotters and warmed up the mash and sauce.

“The cavolo nero is my own little contribution. Different for me, but richly delish,” she added.

But there was a clear division among her followers as fans flocked to her post to share their thoughts.

Majaiwanek tweeted: “Yuck one step closer to being vegetarian again after seeing food like this.”

Stephen Burke 82 penned: “I’m sorry Nigella, but that’s the one thing I can’t abide by that I know you love. B****y pigs feet.”

But others were in favour of the dinner as Renatobie penned: “Such an underrated part of the pig. Is delicious.”