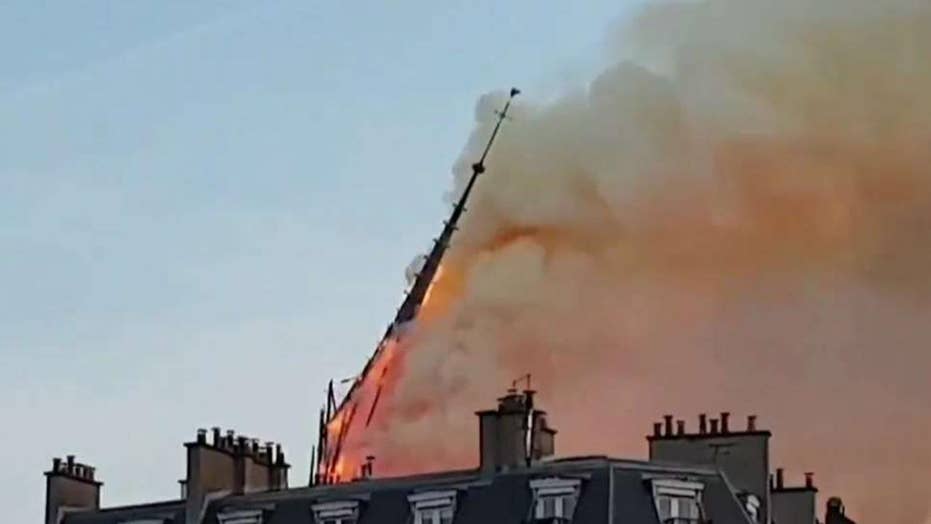 As the world reels in the wake of a destructive fire that damaged the iconic Notre Dame Cathedral in France, many are looking back at some of the structure’s more iconic moments.

Although firefighters were able to contain the blaze before the building fell to rubble, its iconic spire and a good portion of its roof were destroyed. The potential loss of this centuries-old landmark was felt across the world as people wondered if one of history’s greatest feats of architecture would be wiped off the map for good.

The contribution of Notre Dame to history is incalculable. However, for many that have never seen it in person, the famed cathedral has acted as the face of Paris across many iconic films.

FROM THE FLAMES, NOTRE DAME WILL REBUILD

To celebrate Notre Dame Cathedral after such a near-miss, below is a rundown of some of the most iconic times it popped up in film. 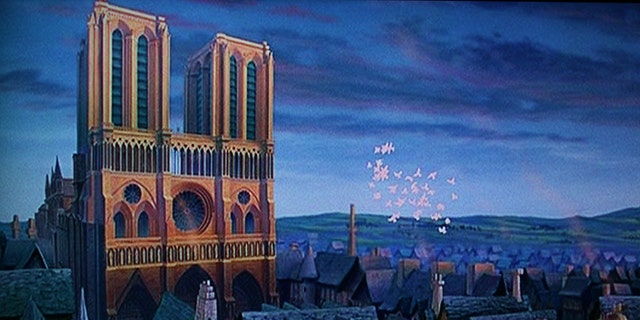 "The Hunchback of Notre Dame" features the iconic cathedral heavily throughout the film.
(Disney)

Based on the French Gothic novel by Victor Hugo, this Disney animated feature is responsible for introducing a generation of people to Notre Dame by way of Quasimodo’s story of acceptance for all. Although it’s by no means the first movie to tell the story of The Hunchback, with adaptations dating back to 1905, it’s the most recent and perhaps well-known glimpse into the story of a young man and the French cathedral he calls home. 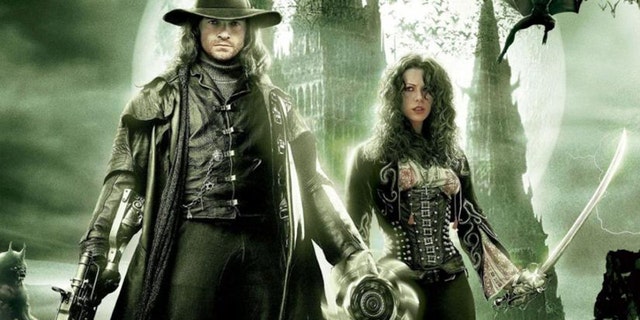 Hugh Jackman stars as the titular character based on the 1897 horror novel “Dracula.” Unlike the book for which the character is based, “Van Helsing” sees the monster hunter travel all across Europe defeating a bevy of well-known horrors along the way. Among the cavalcade of creepy creatures that Helsing faces down is Mr. Hyde. Based on the novel “Strange Case of Dr. Jekyll and Mr. Hyde,” the film opens with Helsing tracking the hulking beast to none other than Notre Dame Cathedral where they have an intense battle that showcases the hero’s abilities before he takes on Count Dracula himself. 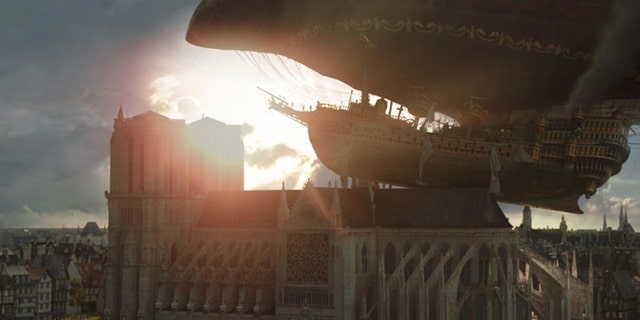 ‘The Three Musketeers’ uses the roof of Notre Dame as the setpiece for its climax.
(Summit Entertainment)

Like many inclusions on this list, there are many other adaptations of the “Three Musketeers,” based on Alexandre Dumas’ 1944 novel. However, what makes the 2011 film an inclusion here is the climactic sword fight between d'Artagnan and Englishman Rochefort that takes place on the roof of the iconic building. The thrilling duel uses the iconic French landmark to stage an action scene like no other. 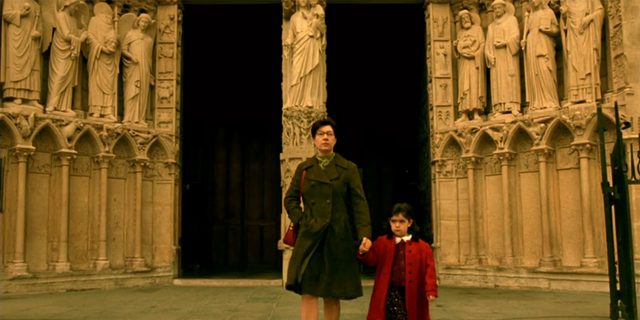 The main character in ‘Amelie’ faces tragedy during a visit to Notre Dame.
( Claudie Ossard Productions)

This 2001 romantic comedy deals with a bit of tragedy using Notre Dame as its setting. The film tells the story of a young girl who goes to the cathedral each year to pray for a younger brother. During one trip, however, she faces a horrific moment when a suicidal tourist leaps from the cathedral and lands on her mother, killing her instantly. While the moment is sad, it sets off a chain of events that sends the adult Amelie on an adventure to find love. 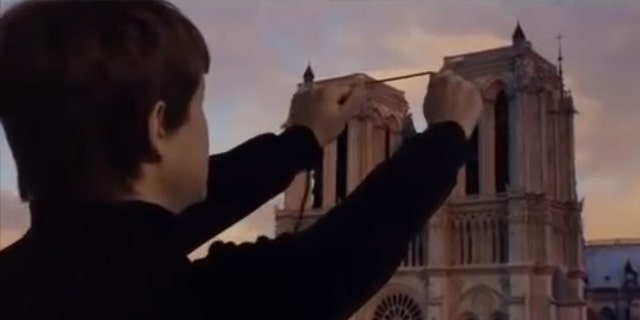 While “The Walk” is mostly a film about New York City’s Twin Towers, which tragically fell during the 9/11 terrorist attacks in 2001, Notre Dame plays a key role in the beginning of the film. Based on the real-life exploits of French high-wire artist Philippe Petit, the film focuses on his iconic tightrope walk between the top of the twin towers. However, he’s emboldened to try the death-defying stunt after successfully walking between the towers of the cathedral in Paris. 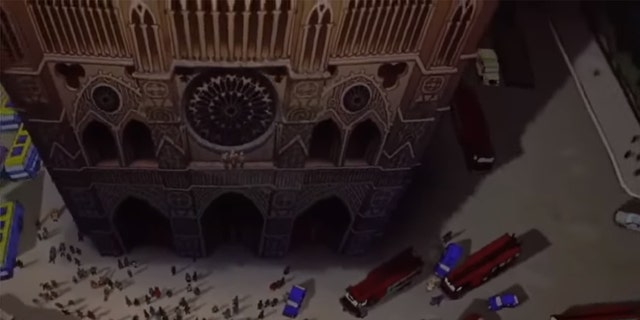 The Rugrats crash a wedding at Notre Dame in the only way they know how.
(Nickelodeon)

When a two-year-old learns that his father is going to marry the wrong woman, he does what every baby would do – crashes a giant animatronic dinosaur through the streets of Paris to stop the wedding at Notre Dame. When Chuckie’s dad is duped into marrying an evil French executive that hates children, the babies rally and take a Reptar robot through the city. Along the way, they pass famous landmarks such as the Arc de Triomphe and the Eiffel Tower before making their way to the cathedral where Chuckie objects to the wedding with his first audible word spoken to the adults. 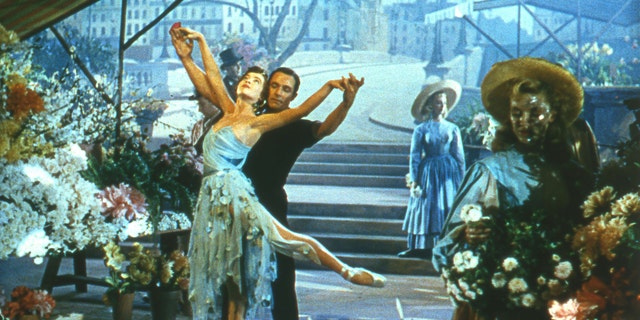 The main characters of ‘An American in Paris’ fall in love in the shadow of Notre Dame.
(MGM)

Paris earns its reputation as the city of love in this story about an artist who falls in love with a French woman who is already with another man. While the story takes place all throughout the great city, the two main characters’ romance is bookended along the Seine in the shadow of Notre Dame. They fall in love to the tune of the Gershwins’ “Our Love is Here to Stay.”