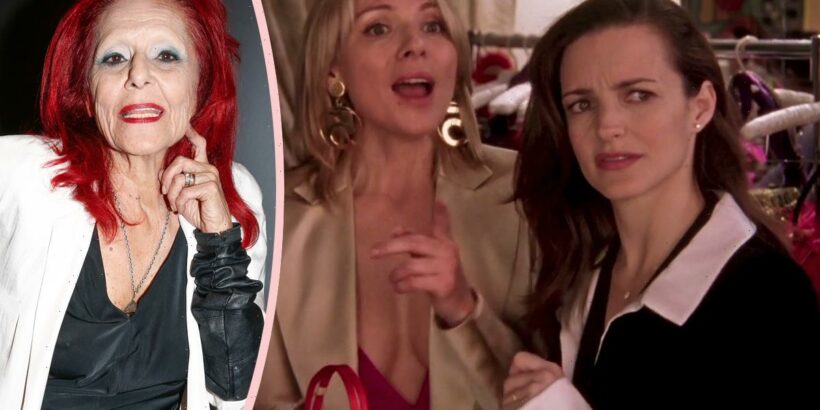 OK, so the Sex And The City revival finally premiered to… well, a mixed reception, let’s say. Old school fans have a lot of opinions about the new directions the show is taking. But one of the major criticisms of And Just Like That… is about what’s NOT there: Samantha Jones.

It’s hardly unexpected that the lack of Kim Cattrall is deeply felt. The ladies were always a foursome. Now they can’t even call the corners. The explanation of where Samantha had gone was as we’d heard in leaks before the show — she and Carrie had a falling out, leading her to take a job in London… and give her longtime BFFs the cold shoulder.

That last part is what some viewers found disrespectful. But for others, it was the UK bit that they found intriguing. As one fan tweeted:

When we first heard about the whereabouts of our missing Miss Jones, our minds also went to the idea of a sexy version of Ted Lasso, with Samantha navigating cultural differences while hooking up with hot British guys. You know what that potential spinoff could use? A costume designer who knows Kim perfectly and also works on a show about an American fish out of water… Yup, Patricia Field!

The OG costumer for SATC had to decline returning to the revival, ostensibly because she was too busy on her current show, Netflix‘s hit Emily In Paris. (Though we always wondered if she was quietly showing loyalty to her friend Kim Cattrall.)

We weren’t the only ones who had the idea though. Page Six caught up with Patricia at the launch of her Seymoure gloves collab and asked if she would be down to dress Samantha Jones again in her own SATC spinoff. She replied:

“I would love to do a show with her.”

The question is, would she make the time to do that one? Instead of And Just Like That…? Hmm.

But don’t worry, she wasn’t trying to drive the wedge between Kim and Sarah Jessica Parker any deeper. In fact she may be the glue to bring them back together as she still has kind words about her other collaborator, whom she credits with bringing her on the show in the first place:

“I knew Sarah Jessica from before because we did this film down in Miami called Miami Rhapsody, and basically, that’s how I got the job on Sex and the City. They made a pilot, and nobody liked the clothes. And Sarah Jessica just grabbed me and said, ‘I want to introduce you to Darren Star.’ She knew my vibe. She understood the tutu. She was great to work with because she loved fashion … two peas in a pod.”

Sounds like quite a friendship. We just wish everyone could look back that fondly.

Of course, Kim apparently wouldn’t have to reconcile in order to return as Samantha. What do YOU think of the idea of a Samantha spinoff series set in London??