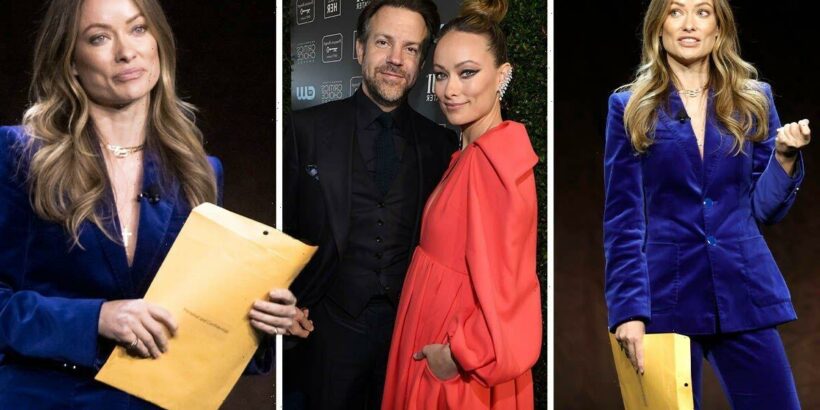 Olivia Wilde, 38, was in a relationship with former boyfriend Jason Sudeikis, 46, from 2011 until 2020 and the pair share two children together. The Hollywood actress, who is now dating singer Harry Styles, took to the stage at the 2022 CinemaCon and was said to be given custody papers from her ex-partner.

This is for me?

Olivia was the center of the presentation for her film, Don’t Worry Darling in Las Vegas on Tuesday night.

The 2022’s CinemaCon was joined by 4,100 film industry experts, leaving Olivia to have a bit of a shock when papers were handed to her live on stage.

According to sources, the manila envelope that was placed on stage at Caesars Palace’s The Colosseum contained custody papers from the 46-year-old Ted Lasso star.

Olivia was briefly interrupted when an unidentified person approached the actress from the front row of the audience at the Vegas event, and slid the envelope across the front of the stage toward her.

She then opened the envelope and briefly read its contents before continuing with her presentation.

It was then further claimed by Variety that Jason did not know she would be served the papers on stage in such a humiliating and public way.

A source told the publication: “Papers were drawn up to establish jurisdiction relating to the children of Ms. Wilde and Mr. Sudeikis.

“Mr. Sudeikis had no prior knowledge of the time or place that the envelope would have been delivered as this would solely be up to the process service company involved and he would never condone her being served in such an inappropriate manner.”

It had initially been reported that the documents were an unsolicited script sent by a fan in the hopes of receiving Olivia’s attention.

Details of their current custody arrangement remain private, and neither Olivia nor Jason have commented on the contents of the envelope.

Reporter Chris Lee detailed her reaction on stage in a tweet.

He said: “Halfway through her spiel about Don’t Worry Darling, Olivia Wilde was handed a manilla envelope. Seemed like she was served a lawsuit!”

Chris said that Olivia said: ‘This is for me? Is this a script? Ok got it. Thank you.’

“I thought it was part of the presentation or a joke. But then…that was the end of it.”

CinemaCon said they are now reevaluating their security procedures, in light of the incident.

They released a statement: “We have never in the history of the convention had an incident where a delegate has approached the stage who was not authorized to be there.

“In light of this incident, we are re-evaluating our security procedures to ensure the safety of all our attendees.”

Olivia’s latest film Don’t Worry Darling is being released by Warner Brothers this coming September and stars her much younger boyfriend Harry Styles, 28.

The duo formed a close bond while shooting the psychological thriller, which also features the likes of Florence Pugh and Gemma Chan, in 2020.

Despite the initial reports of an amicable split, a source claimed to Entertainment Tonight in January 2021, that Jason had been “really hurt” by her moving on with Harry.

A source said: “[Jason] has been really hurt and somewhat jealous that Olivia has moved on with Harry.”