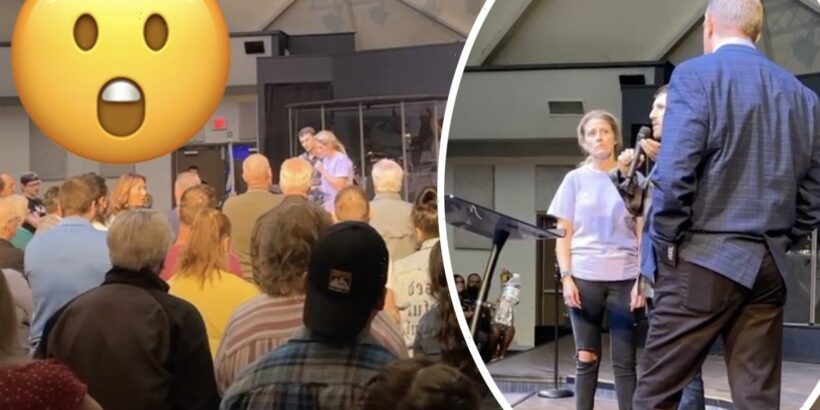 Man, this got so much worse, so so fast.

A pastor got himself a standing ovation in his Warsaw, Indiana church on Sunday by confessing he had committed the sin of adultery. Then they heard what really happened.

Pastor John Lowe II told his New Life Christian Church that he had cheated on his wife with a woman, beginning “nearly 20 years ago,” and that it had “continued far too long.” He made it clear this was a single affair, saying:

“It involved one person and there’s been no other. I sinned. I need to say that and you deserve to hear it.”

After asking for forgiveness from “those that I sinned against,” he publicly stepped down from his position, citing recommendations from the board. Like we said, his congregation didn’t revolt — they actually applauded his honesty! Of course, that was after hearing his side of the story. But one person wasn’t about to let it go at that: the woman he had the affair with! Or should we say, the girl.

A woman stood up and walked to the podium with her husband, grabbing the mic and telling her story. She said she “lived in a prison of lies and shame”:

Why would that detail be so crucial? Oh, because of her age when the “affair” began!

She explained she “was a victim” and would still be in that prison of silence, covering up for Lowe, if her brother hadn’t shared with her something he saw all those years ago “as a teenager”:

“His pastor in bed with his younger sister.”

That’s right. He was a teen, and she was his YOUNGER sister. She went on to make things crystal clear, stating in front of the entire Sunday crowd:

“I was just 16 when you took my virginity on your office floor. Do you remember that? I know you do.”

16 years old. He groomed this girl, there’s just no other way to look at it! And on the church office floor? Whoa!

Now, we have to point out that 16 is actually the age of consent in Indiana, which… already when you’re talking about with a grown man and not another teen, gross! However, he was also her pastor. That’s a position of power, no different than a teacher having sex with a student. That’s foul.

She said her brother wasn’t the only person who saw things and stayed silent for years, to protect this community leader. She said:

“People knew but were too afraid to come forward.”

She also blasted his so-called confession, saying he was “not the victim here” as he’d implied with his B.S. version of events. She declared:

“The church deserves to know the truth. This church has been built on lies, but no more.”

She accused him directly:

“You did things to my teenage body that had never and should have never been done.”

Upon hearing these allegations, members of the church demanded answers of their now former pastor. He finally admitted:

Right, if people are pissed it’s because they’re not forgiving enough, is that it? Disgusting. What’s more, he didn’t come forward of his own volition, like he implied. In a statement after the video went viral, the Church explained that “this long-held secret first came to light when a woman in the church came forward and disclosed the relationship to various people within the church.”

“When confronted by others in church leadership concerning that report, Pastor Lowe confessed privately that the adultery did, in fact, occur. The woman in question and her family did attend together and addressed the congregation, indicating that improper sexual conduct first occurred when she was 16 years of age and continued into her twenties. She tearfully described living with deep shame and pain over the ensuing years.”

Speaking of which, is it too late to prosecute? The Kosciusko County Prosecutor’s Office told WANE there is an investigation ongoing. We’ll have to see if there’s anything that can even be done all these years later. But at least it’s out in the open now!

See the shocking confrontation (below):