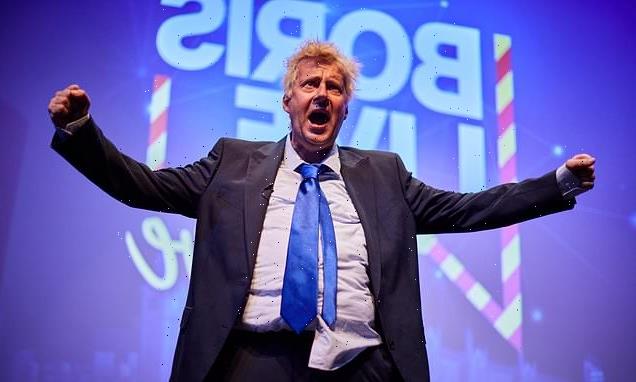 The smoking battlefield of British politics is on full view at this year’s Edinburgh Festival, with its skewered ambitions, blasted careers and charred reputations.

And where better to start than with the wounded Boris himself, as actor Will Barton serves up a caustic tour de farce playing the deposed PM in Jonathan Maitland’s bawdy satire Boris Live At Five. Barton and Maitland achieve the almost miraculous feat of pleasing those who love Boris as well as those who loathe him — of whom there a very great many in Scotland.

Nor do the creators of this mock Q&A go easy on the Scots, as Barton’s dishevelled Bojo greets the Edinburgh crowd with ‘Hello Glasgow!’ before offering to make Scotland great… ‘for the first time in its history’.

It’s a seriously Chaucerian performance with one of the questions Boris plucks from a bucket asking: ‘What sex position best represents your time in Government?’ The idea of ‘Rexit’ (rejoining the EU) he likens to having a vasectomy, followed by a reverse vasectomy and then a reverse-reverse vasectomy.

And on the question of if he’s been lucky with his opponents he quickly agrees, singling out ‘Starmer the Embalmer’. Not only is Maitland’s dialogue bluer than a Tory party conference, it’s also bang up to the minute. 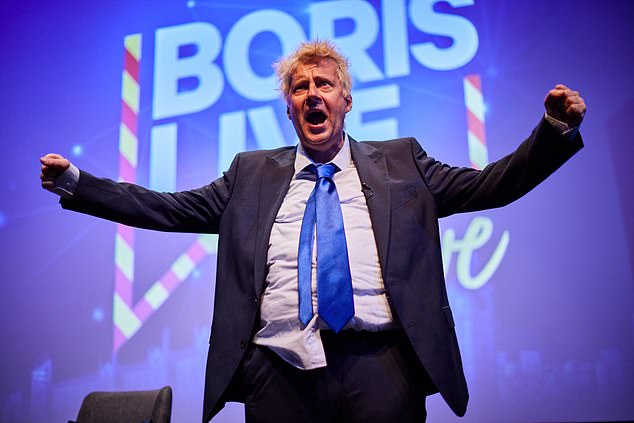 The Old Etonian gets another caning in Boris III (Pleasance Courtyard), which imagines Johnson taking the title role in Shakespeare’s tragedy Richard III in a chaotic (and allegedly real) school production. Boris hasn’t read the play, doesn’t know his lines — and has been bonking the sister of an actress who’s meant to be his girlfriend.

His solemn promise beneath his blond thatch is that ‘it will never happen again’. Ooh and he’s in trouble for an illegal party in the dorms. Harry Kershaw makes a good fist of the teenage Boris, but this does feel like a flimsy schoolboy caper. It also lapses into a ‘lessons learnt’ exercise as the teacher supervising the show reminds Boris that the king cannot play the clown. Boris counters: ‘They knew what I was like when they gave me the part.’

On the other side of town, Tim Walker’s Remainers’ lament Bloody Difficult Women (Assembly Rooms) is a tidily rendered account of Gina Miller’s legal bid to force a vote on leaving the EU during Theresa May’s premiership.

Amusingly, May has forbidden mentioning the name of Boris, and he is only referred to as ‘the Foreign Secretary’. Miller comes across as decent but dull, while May comes across as dull but decent — and anyway, we know how it ends.

Dramatic interest is created instead by a profane character assassination of a former editor of this paper, which sends a hot blast of colour through the constipated corridors of power. Ironically, it’s the most entertaining role, despite actor Andrew Woodall’s fidgety efforts to play it down.

Talking of being lucky in your enemies, the Tories can take heart from Exodus (Traverse), produced by the National Theatre of Scotland. Rather pathetically, they fail to lay a satirical glove on the Government in a fictional Tory leadership contest in which a photo opp on the south coast goes wrong when a baby is washed up, Moses like, at the feet of the Home Secretary.

Although clearly modelled on Priti Patel, the real-life Home Secretary has nothing to fear from Uma Nada-Rajah’s play, which fails to fully exploit the time-bomb potential of the infant she reluctantly rescues and stows away on a train back to London

None of the characters are credible, with the possible exception of the hatchet-faced, control-freak press officer (Sophie Steer). Worse, Debbie Hannan’s production looks like something out of the BBC’s Balamory. Is this really their best shot?

To beanie, or not to beanie, that is the question

But it’s a play in which he hasn’t always prospered. The 83-year-old’s performance in the title role at the Edinburgh Festival back in 1971 was not considered a success, even by him.

And now, 51 years later, in the same city, I fear that alongside the usual madness . . . there is ballet in it.

The show is an outre, dance-based interpretation of the tragedy featuring hippie choreography by Peter Schaufuss, staged at Stockbridge’s impressively restored Ashton Hall (a stern Protestant kirk which features a picturesque rocket of a clock that is said to boast the longest pendulum in Europe). 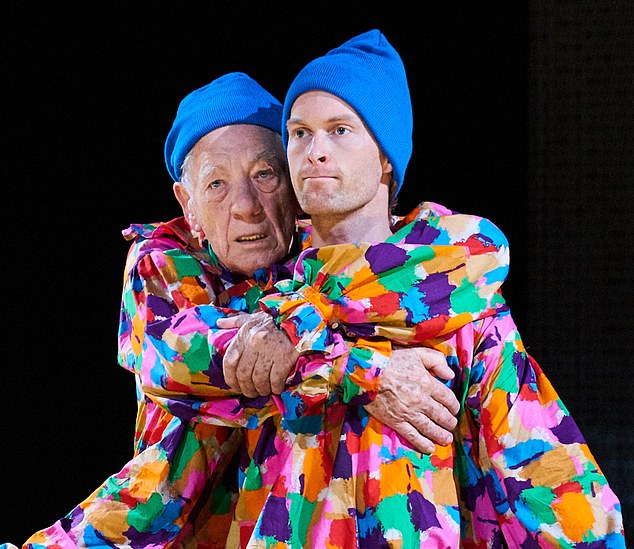 Sir Ian McKellen is back playing Hamlet in a show that is an outre, dance-based interpretation of the tragedy featuring hippie choreography by Peter Schaufuss, staged at Stockbridge’s impressively restored Ashton Hall

Sadly, it only succeeds in putting the ham into Hamlet. A shiny black promontory stage, backed by an austere chain-mail curtain, is the setting for the perennially sprightly McKellen and a company of eager young dancers.

The venerable thesp voices the thoughts of Hamlet, while dancer Johan Christensen brings them to life, accompanied by Ethan Lewis Maltby’s histrionic score. It’s a soundtrack which may evoke the cinematic panoramas of Middle Earth and The Hobbit movies, but the dreamy strings, pounding drums and primal chants (‘ooh ooh ooh’, and ‘aah aah aah’) also threaten to drown out the great man’s diction.

Thankfully, McKellen’s famously sibilant whistle, with notes of his native Lancashire, just about holds up. After all, nobody hits those final ‘t’s quite like Gandalf. The bad news for the dancers is that it’s McKellen who’s the big draw and inevitably pulls the eye. The youthful corps de ballet may leap about like salmon, but Schaufuss’s choreography is not just a form of flower-power interpretive dance. There are toe-curling illustrations of fighting, drinking, and dying, too.

For the mad scenes, black, bottom-hugging costumes yield to a ghastly tangerine dream. The spies Rosencrantz and Guildenstern hop their way onto the stage, by way of ‘comedy’; and our two Hamlets (the speaking and the dancing versions) are both outfitted with orange harlequin shirts and matching beanies.

After 75 minutes, it climaxes in an actorly wrestling match and a reprise of that Old Spice chanting. Personally, this is not how I hope to remember the Prince of Burnley. We must pray for a more dignified end to a grand career.

If you have only one day at the Fringe, it’s still possible to pack a lot in — even without forward planning. Here’s how I winged it this week . . .

First up, a morning children’s show. There are some crackers this year, among them Covid For Kids, which has lots of audience participation. You can pretend to be a bogey or a nasal hair as Professor Tom Solomon (pictured below) explains all about the virus. 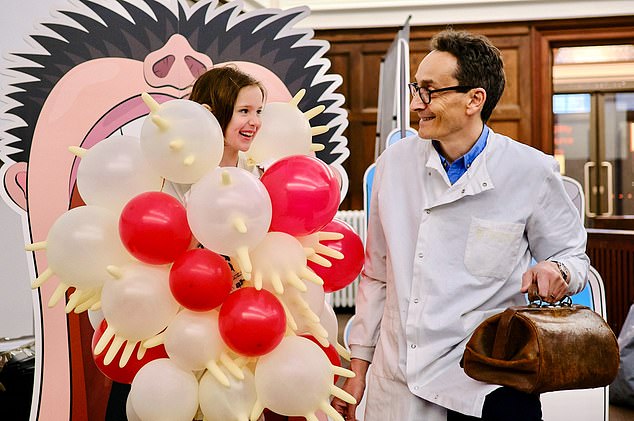 Covid For Kids has lots of audience participation; you can pretend to be a bogey or a nasal hair as Professor Tom Solomon (pictured ) explains all about the virus

Eavesdropping (or Walk This Play)

Then to the Traverse, for its terrific immersive Eavesdropping. Download an app, don headphones (use your own or reserve some) and allow yourself to be guided down Edinburgh’s ginnels and wynds, as tales about the city’s characters unfold in your ears.

Afghanistan Is Not Funny

At the Gilded Balloon, I saw storyteller extraordinaire Henry Naylor in his one-man show, Afghanistan is Not Funny, about his research in the war-torn country — and the lessons we’ve failed to learn. 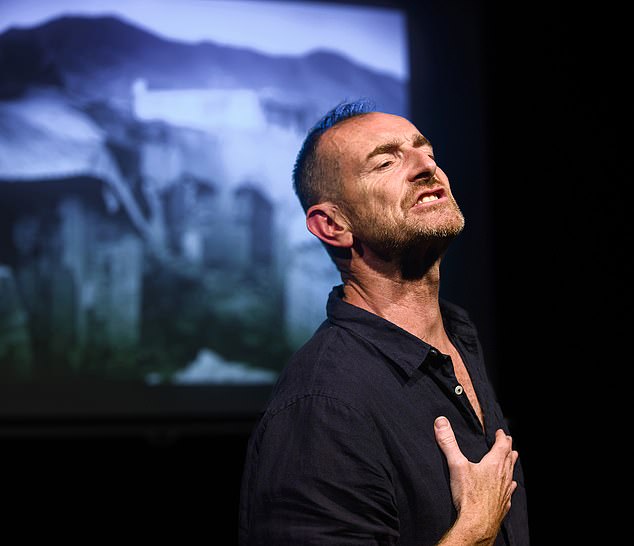 Storyteller extraordinaire Henry Naylor and his one-man show, Afghanistan is Not Funny, which is about his research in the war-torn country — and the lessons we’ve failed to learn.

Then a stroll along the Royal Mile for the most colourful free show at the Fringe, as artists ply passers-by with flyers; and jugglers, magicians, actors, and singers perform sections of their shows to entice you to head to the nearby Fringe box office.

Off to the Monkey Barrel, to see Lou Sanders (from Mel Giedroyc’s Unforgivable on Dave), whose latest comedy show is about her rollerskating adventures.

Then over the road to The Caves (once whisky storage vaults), where I took pot luck on what was on offer. It had to be Biscuit Barrel: Wafering Heights, an absurdist group (five stars for the title alone) whose proud boast is that they can perform 69 sketches in one hour.

Kathy And Stella Solve A Murder!

Next stop was Summerhall, located at the delightfully named Royal (Dick) — a former veterinary school, founded by Mr William Dick — that is a powerhouse for new writing. Its unmissable show this year is Kathy And Stella Solve A Murder!, a hoot of a musical whodunnit about best friends from Hull who talk about grisly murders on their podcast.

Finally, improv by Snort. A changing line-up of New Zealand talent made for a nicely daft way to end the day.