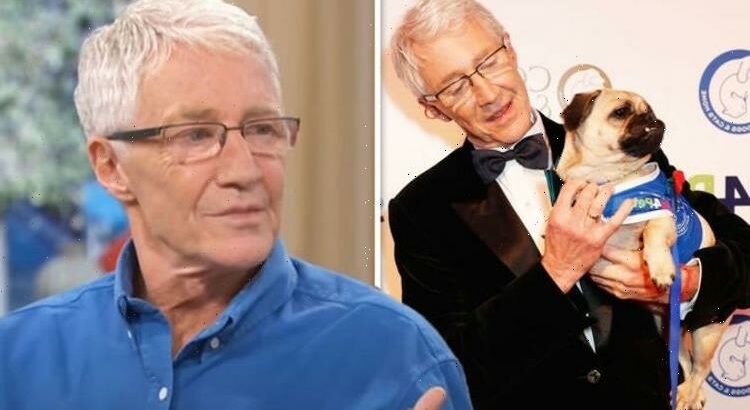 Paul O'Grady announces a new For the Love of Dogs season

Paul O’Grady, 66, addressed a grim incident when the presenter was admittedly caught short while out walking his dog Buster. The For the Love of Dogs host has revealed that his beloved pooch needed to do “his business” while they were out.

The ITV host explained that he is always “conscientious” about cleaning up after his dog.

But on this occasion, he confessed that he did not have a poo bag to clean up his dog’s mess and so decided to improvise.

Speaking with Claudia Winkleman on BBC Radio 2 yesterday, Paul opened up about the awkward moment.

He began: “When Buster was a puppy, I was out with him on the green. He did his business and I’m very conscientious. I always clean up after. And of course, no poo bag – all I had was a fiver.

“So over I went, picked it up with the fiver, and put it in the bin.”

The Blankety Blank presenter later went home to find a poo bag and dispose of the mess.

“Took Buster home, found a poo bag, went straight back, opened the bin, shook the fiver out into the poo bag,” Paul said.

But he had no plans to waste the cash as he used the same money to buy a pint of milk.

He added: “Went home, wiped the fiver down, and then went to the shop and bought a milk and a paper with it.”

Paul also recalled another awkward moment after the presenter found a poo bag in his pocket while he was up on stage accepting a prize at the National Television Awards.

The presenter, who previously hosted shows as his drag alter ego Lily Savage, said: “I was up there getting awkward and I had my hand in my pocket and there was a dog biscuit and a poo bag in my pocket.”

Paul’s beloved dog Buster, who often appeared on TV with the small-screen star, sadly died of cancer 12 years ago at the age of 14.

The presenter also owned a Cain Terrier called Olga, who was put down in 2018 after suffering from kidney failure.

Meanwhile, the TV host has returned to viewers’ screens thanks to his new ITV show, Paul O’Grady’s Saturday Night Line-Up.

He promised a “dirty” show after he previously bemoaned the “boring state of chat shows”.

At the time, he took a swipe at other ITV presenters after taking aim at their shows.

“This will never get to a series. It’s the dirtiest show that is possible on telly. It is too rude,” Paul commented.

“But they want a bit of rudeness now.”

He added: “I mean who the f*** wants to watch Alan Titchmarsh? You know what they are like at ITV, they are a bit leg-crossed aren’t they?

“Phil and Holly – the pair who p*** themselves if somebody says ‘bum.'”