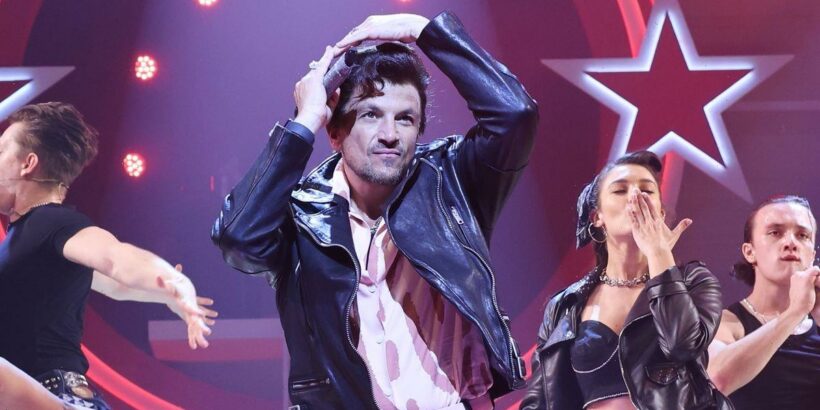 Peter Andre put on a sexy show as he slicked his hair back for his West End debut in Grease on Tuesday.

The 49 year old singer looked every inch the '50s heart throb as he took on the role of Vince Fontaine in the hit show.

Pete has had a hectic couple of weeks, and his performance comes after he found himself at the centre of the Wagatha Christie court case, when old comments Rebekah Vardy made about his manhood were brought up by Coleen's barrister.

Taking to the stage at London's Dominion Theatre, Pete wore a pair of loose black trousers with a white belt, a white shirt and a leather jacket.

The look was finished off with a pair of leopard print creeper shoes.

His debut has been highly anticipated by his fans, but the show has been receiving mixed reviews from critics.

The latest take on the iconic 70s musical has opted for a more modern twist. It has a diverse cast, same-sex dance couples and ha brunette Sandy.

Vince, played by Edd Byrnes in the hit 1978 movie, sports a suit to host the school dance, but it seems Pete has been given a Danny-style look.

Last week, Pete furiously hit out at having faced 15 years of "unfair" chipolata jokes, after Rebekah was quoted as comparing his manhood to a small sausage.

Addressing how he previously remained silent on the matter, Pete said in an Instagram video: "I kept quiet and I didn't say anything, I let everyone have their laugh and let everyone say what they wanted to say.

"Yes, [Rebekah Vardy's] gone to court and admitted that the story was made up and she did that because her ex-husband forced her to do it.

"But, put that all aside right and just think how it feels, like if a man or if I had said this about her anatomy or about a woman's anatomy and made up something… You can use your imagination saying something very unflattering… There would be outrage."

He also apologised to his Emily for the saga.

And writing in his new! magazine column this week, Pete addressed the topic of mental health.

He wrote: "For so long, mental health was considered a taboo subject, with some people even questioning whether or not it was a real thing. But it’s incredibly real and can be debilitating and, in extreme cases, deadly.

For more celebrity news, sign up to OK! newsletters here.