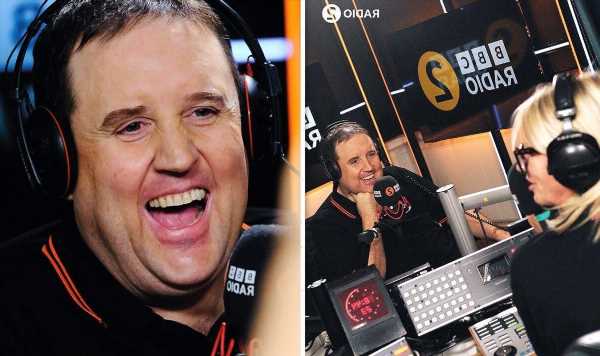 Peter Kay says he wanted to call tour ‘Peter Who?’

Comedian Peter Kay, 49, was forced to issue an apology when he appeared on The Zoe Ball Breakfast Show today after he swore live on air. The star’s appearance on BBC Radio 2 comes shortly after he announced he would be making a comeback to the comedy scene.

Peter and Zoe, 51, were co-presenting her BBC Radio 2 show today following the comedian’s exciting announcement that he would be going on tour after 12 years of absence from the stand-up scene.

Minutes into Peter’s appearance on the show, after listening to Music for a Sushi Restaurant by Harry Styles, Zoe commented on the funnyman’s outfit.

“Peter has come in today really brilliantly dressed in black with a little orange thread round,” Zoe began.

“What are you on about? Think you’ve had a refresher,” Peter said in a jokey reference to the famous sweet.

“I know, I need a refresher,” Zoe replied, before continuing: “You’ve got orange around you and you’re matching our Radio 2 orange branding. It’s a lovely look…”

“Yes I’m so sorry – wait, you said it again!” Zoe exclaimed in realisation.

“I know, but I could’ve said it in the context of blood,” Peter explained.

“Yes, you could have done…” Zoe agreed bemusedly.

“So there’s my excuse on that one,” Peter continued. “I won’t swear again.”

“My mum’s already texted me saying I want to watch my fillings with that refresher.”

“They’re tough aren’t they!” Zoe replied, before swiftly moving the conversation onto sweets from their childhoods.

During the interview, Peter also confirmed he will be performing in a monthly residency at London’s O2 arena, starting on 16 December until 18 November 2023.

The news comes after his announcement this week that he would be doing his first UK tour in 12 years.

Peter has stayed out of the spotlight since cancelling his 2017 tour due to “unforeseen family circumstances”.

The star admitted he was “overwhelmed” by the public’s reaction after his return to comedy made headline news.

The Zoe Ball Breakfast show airs weekdays at 6.30am on BBC Radio 2.