Phillip Schofield, 59, and Holly Willoughby, 39, have suffered their fair share of mishaps on This Morning throughout the years. The ITV duo was joined by their guest Matthew Wright when the pair noticed potential danger overhead.

As the presenting duo began their discussion, it wasn’t long before they noticed a spotlight began twisting around on the ceiling.

The trio nervously looked up at the rattling light, which began to swing back and forth above Matthew’s head.

In a panicked tone, Phillip said: “What is that? There’s something jittering in the roof.

“Something’s moving up there – and it’s not meant to.” 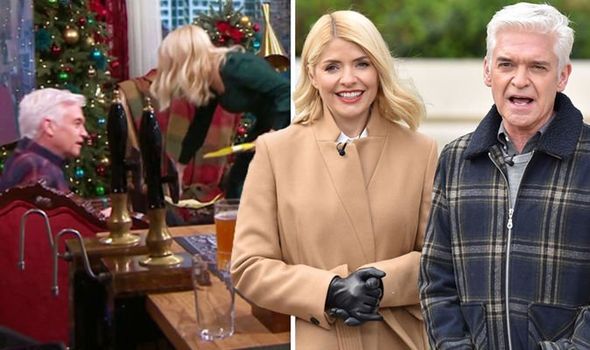 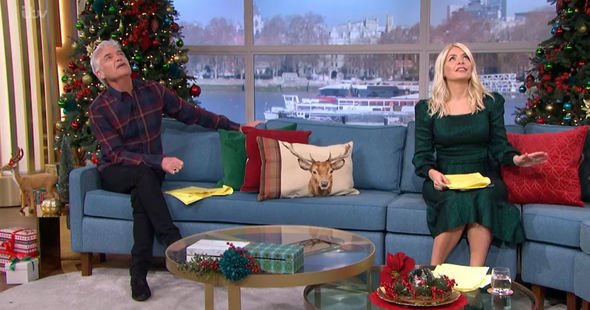 Matthew, who was in the studio for the news review, asked: “Can I move? No? I can’t?”

But he was unable to move from the sofa due to social distancing guidelines.

“You’re not allowed to,” Phillip replied. “If it comes down you’ll have to take it full on the head.”

He then quizzed the This Morning team: “What we need is an assurance from the lighting department that everything is OK. Lighting – is it all right?” 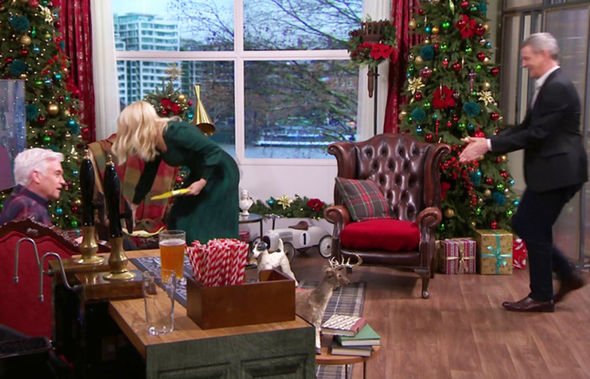 But it wasn’t long before the trio made a run for it off the ITV set, with Holly saying: “Shall we go to the pub?”

The show has it’s own on-set pub which was put together for the festive period.

Phillip was the first to make it over the other side of the room to the This Morning Arms.

He later explained to viewers what the issue was after the team did a quick investigation during an ad break.

Phillip told viewers that the wires of two lights had got intertwined, causing them to crash into one another.

The presenters later returned to the main sofa area to continue the rest of the daytime show.

Elsewhere, Phillip recently took to Twitter and paid an emotional tribute to his former co-star Kate Young who has died.

The This Morning presenter shared a photo of the musical director who worked with during his time playing Joseph in Joseph and the Amazing Technicolor Dreamcoat on the West End.

In view of his 4.5 million followers, he penned: “Heartbroken to hear of the passing of Kate Young @katarinageo who was one of my musical directors during my Joseph years.

“So sad. All my love to her family,” the star concluded.

This Morning airs weekdays on ITV at 10am.