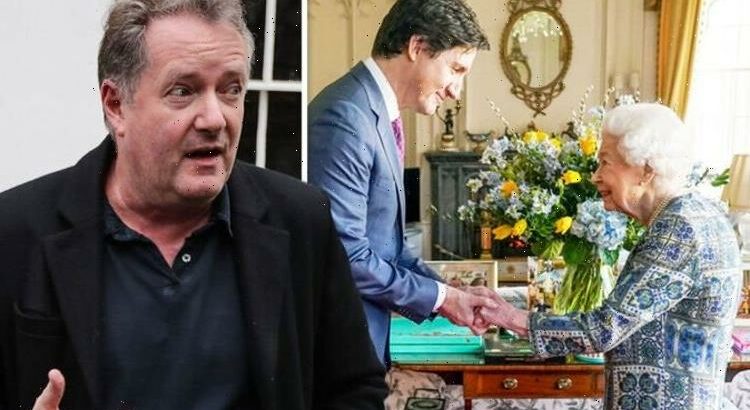 The Queen has held her first in-person engagement since catching Covid-19 after meeting with Justin Trudeau yesterday. Piers Morgan took to social media and slammed the Canadian Prime Minister after he attended a meeting with Her Majesty without sporting a face covering.

The Queen, 95, tested positive for coronavirus on February 20, just days after Prince Charles and the Duchess of Cornwall both contracted the virus.

The monarch was pictured standing and smiling warmly at Mr Trudeau as he held her right hand in both of his.

But the former Good Morning Britain presenter was left unimpressed as he hit out at the Canadian minister.

Taking to Twitter, the 56-year-old shared his thoughts on social media as he hit out at the royal meeting.

In view of his 7.9 million followers, Piers shared a photo of Mr Trudeau meeting with Labour leader Kier Starmer where the pair could be seen conversating while wearing face masks.

A second photo showed the Queen pictured with the Canadian politician where his face covering was noticeably missing.

Piers fumed: “Why on earth would @JustinTrudeau wear a mask to meet @Keir_Starmer but not the Queen? Preposterous.”

He was soon inundated with messages from his followers, as some social media users agreed with the presenter’s stance.

Twitter user, Mario Lannone agreed, writing: “Good point. Doesn’t seem to be any logic to that at all.”

Forrest Ander commented: “And they both have just recovered from Covid.”

Matt Aaron quizzed: “Didn’t the Queen just have COVID? I know ‘natural immunity’ doesn’t last long, but she had it only a week ago.”

However, others disagreed with Piers’ and suggested that the Canadian Prime Minister may have been following certain protocols.

Granny G tweeted: “More than likely he checked with the staff at Windsor as to what the proper mask protocol would be beforehand.”

Gary Morgan remarked: “Perhaps it was a rule to wear masks in the building @JustinTrudeau met Keir Starmer. When anyone meets the Queen they follow strict rules which they will be given prior to meeting her. I’ve no reason to doubt why he wouldn’t follow those rules.”

In candid photos taken alongside the Queen, Mr Trudeau was also seen laughing as Her Majesty gestured towards herself during the meeting.

He later said she was as insightful as ever, adding that she was very interested in what was going on with Russia.

He said: “I can tell you in my conversation with her this morning she was as insightful and perspicacious as ever, very interested in what’s going on.”

In an earlier meeting, Mr Trudeau met with the Labour leader to discuss the ongoing crisis in Ukraine.

Taking to Twitter, Kier wrote: “It was a pleasure to meet with @JustinTrudeau, for a productive conversation about our mutual solidarity with the Ukrainian people and our unshakeable commitment to NATO.

“Unity amongst democratic nations is vital in the face of Russian barbarism.”