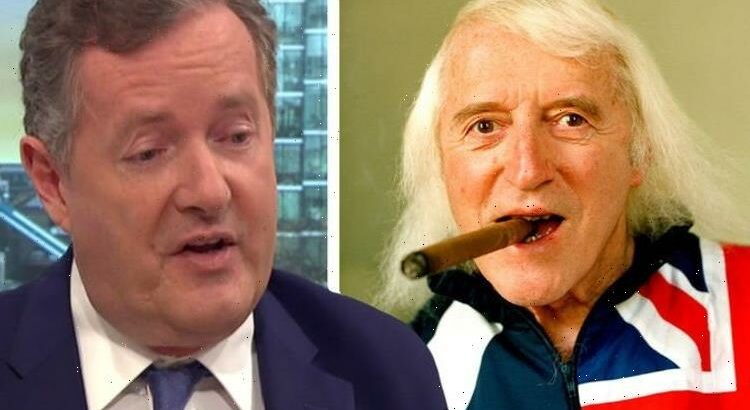 Piers Morgan, 56, has met a lot of famous people in his time, but there have been a fair few meetings that have been used against him as various scandals arose. One of those culprits was late TV presenter Jimmy Savile, who hosted BBC shows including Top of the Pops and Jim’ll Fix It back in the day.

I proudly recorded this exchange in my diary and gushed: ‘I’ve always loved Jimmy Savile’

At the time, he was widely praised for his personal qualities and as a fund-raiser, raising an estimated £40 million for charities across the UK.

But he was hiding a dark secret; one that shocked the nation and left deep scars on the lives of many.

Following his death in October 2011 aged 84, it emerged he sexually abused hundreds of victims, many when they were just children.

Police believe Savile may be the most prolific paedophile in British history.

With his legacy in tatters, Piers recalled meeting the then-icon at the height of his fame and popularity.

He found his diary entry where he gushed over the encounter, one that he now refers to as the one that “aged the worst”.

In his latest Daily Mail column, the ex-Good Morning Britain star penned: “In March 2009, I attended a friend’s wedding, and another guest came up to me to exclaim: ‘Your TV shows are BRILLIANT.

“‘And as I’ve been in the telly business for 50 years, you can take that as an informed view.'”

But it’s not the first time Piers has come under fire for meeting and being pictured with high-profile individuals that have been embroiled in scandals.

Despite acknowledging the wrong doings of his former acquaintances and condemning them publicly, Twitter users continue to highlight his meetings with said individuals.

Most recently, Piers’ smiling picture alongside Maxwell caused a stir after she was found guilty on five of six counts of sex trafficking in the Epstein sex abuse case, and the presenter felt he needed to hit back at criticism surrounding him.

Taking to Twitter to fire back, Piers penned in view of his 7.9 million followers: “It’s been brought to my attention that I’ve been photographed with a number of famous people and am therefore guilty by mere association with them.

“I can only apologise for this gallery of shame.”

But it wasn’t the apology some may have wanted to see, as in pure Piers fashion, it was marred with sarcasm.

Instead, in the photos attached to the post he shared alternative photos of himself with beloved famous figures including the Dalai Lama, Nelson Mandela, Stephen Hawking, and even the Queen.

Yet even that impressive portfolio did little to detract Twitter users’ attention away from the matter at hand.