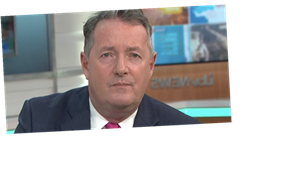 Piers Morgan has quit Good Morning Britain after storming off the ITV show over a row about Meghan Markle.

ITV confirmed that the 55 year would no longer be part of show in a statement, which read: Following discussions with ITV, Piers Morgan has decided now is the time to leave Good Morning Britain.

"ITV has accepted this decision and has nothing further to add."

The news comes after more than 41,000 viewers complained to Ofcom following his remarks about the Duchess of Sussex.

"They've trashed everything the Queen has worked so hard to maintain, the monarchy, and we're supposed to believe they're compassionate?"

Co-host Susanna Reid responded: "They felt they were trashed and lied about. She said she was driven to the verge of taking her own life."

The former Britain's Got Talent judge added: "They said that yeah," hinting he doesn't believe her claims.

An Ofcom spokesperson said: "We have launched an investigation into Monday's episode of Good Morning Britain under our harm and offence rules."

Later on the programme, Piers stormed off after getting into an argument with co-star Alex Beresford, 40.

Alex told Piers: "They have had an overwhelming amount of negative press. I watched the programme yesterday and, yes, they had some great press around the wedding, but what press is going to trash someone's special day?

"There was bad press around the engagement, before the engagement, everything that has followed since has been incredibly damaging, quite clearly to Meghan's mental health and also to Harry.

"I hear Piers say, you know, William has gone through the same thing but siblings experience tragedy in their life. One will be absolutely fine and brush it off and the other will not be able to deal with it so strongly, and that is clearly what has happened with Prince Harry in this situation."

The weatherman continued: "He walked behind his mother's coffin at a tender, tender age in front of the globe. It's going to shake a young boy for the rest of his life, so I think we all need to take a step back.

"Has she said anything about you since she cut you off? I don't think she has, but you continue to trash her…" before Piers cut him off.

Launching out of his seat, Piers said: "Okay, I'm done with this. No, sorry, see you later," as he walked off set.